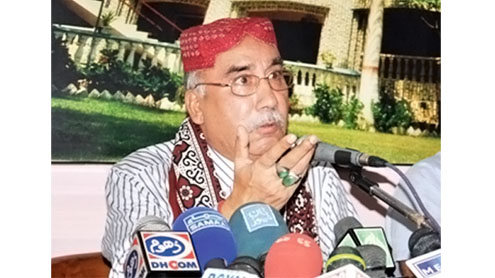 The fine lyrics, melodious harmonies and beautiful voices that gave birth to such classics are no longer present in the music being produced and composed in Lollywood. Instead, Indian item songs have started to dominate the Pakistani music scene. Despite the decline of the music industry, musician Wajahat Atray believes that the revival of the historic art is possible in the near future.

“The life of pop, rap, rock and fusion and rang baazi (vulgarity) is ephemeral while that of the classical, ballads and other slow-rhythms is ever-lasting and resurgent,” Atray said at the Hyderabad Press Club on Sunday.Born into a family of musicians, Atray learned the musical art from his father, the late Rashid Atray, a famous harmonium player of Pakistan. Over the last 48 years of his career in the music and cinema industry, Atray has composed thousands of songs and contributed to around 450 movies. The song “Main Jeena Tere Naal” is one of his recent hit compositions.

According to Atray, the country does not have quality musicians, lyricists and singers. What the Pakistani music industry lacks in talent, Bollywood makes up for, attracting millions of listeners to its catchy melodies and infectious rhythms. Atray questioned to defend his assertion: “How many people sing ‘Sheila Ki Jawani’, ‘Munni Badnaam’ or ‘Channo’ the way they used to croon ‘Mujhse Pehli Si Mohabbat Meray Mehboob Na Maang?’”He also went on to say that only a few singers like Amanat Ali Khan, Rahat Fateh Ali Khan, Humera Channa, Shafqat Amanat or Hamid Ali Khan have the talent to keep up with new compositions.

“The problem is that new singers have not acquired the fundamentals of singing. They are not familiar with basics like the seven surs (melodies) and riaz (persistent practice),” said Atray. The same was his answer when asked why good music is reliant on films and not private production. “You can find trainers of classical art in singing and composition but you can’t find singers.”

Answering a question asked about the growing recognition of visual art in the country, he said that an average painter and sculpture artist earns more than an average musician or singer. “The musician-families who have been passing the legacy to the generations are living a life of austerity. They don’t even have enough to pay for education of their children,” he commented.

As an advocate of Pakistani music, Atray stated that the government must take an initiative to improve the situation. He said that by hiring the services of the few remaining musician families, the government should establish music academies and provide the Pakistani youth with incentives to pursue this art. In order to further his claim, Atray also gave the example of India where the music has not lost its essence as the modern genres of music have found their space in the cinema industry.“The difference is of recognition and earning a satisfactory livelihood from the profession which has not been happening here in Pakistan,” he added.