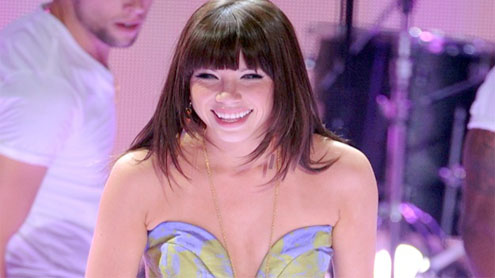 The Canadian songstress was catapulted to international fame earlier this year when she released her hugely successful single Call Me Maybe in the US and beyond.Carly’s career has been supported by fellow Canadian superstar Justin, for which the 26-year-old songstress is extremely appreciative.

‘It’s just nice in general that he has been such a big supporter. He changed the game for me and I don’t know what I would be doing had he not come along and put his influence behind Call Me Maybe,’ she gushed to British newspaper The Sun.’It really changed my world, so I’m very grateful that we’re a team. My sister is adamant that one way or another we’re going to have a hang session with Justin though. I’m like: ‘Ooookay, I’ll see what I can do.”

Carly has been in the limelight since reaching number one in 20 countries. The brunette star says her fans are sometimes a bit overzealous.’I was asked in my hometown to judge a pumpkin carving contest with the mayor,’ she explained. ‘There was a passionate fan who carved my face into a pumpkin, which was slightly concerning.’ – MSN