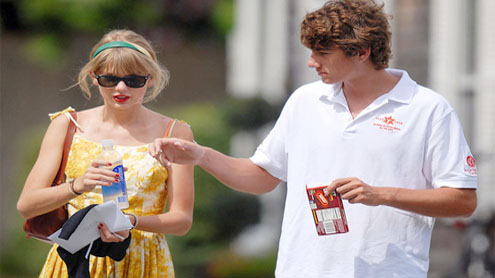 Rory Kennedy is elated that Taylor Swift is dating her nephew Conor.The 22-year-old country singer and Robert F. Kennedy Jr.’s son Conor, 18, have been coupled up for a few months now.

Although there is speculation that many members of the Kennedy family are wary of Taylor since she and Conor crashed a wedding last month, apparently Taylor is very loved.’I think she’s fantastic and I couldn’t be more thrilled,’ Rory told Us Weekly.’She’s a good friend of our family and we all adore her and love her. It’s great to have her around. [I’m a] huge fan.’

Taylor is rumoured to be ready to marry Conor.Apparently she is enlivened by possibly becoming a Kennedy in the future.’She says it’s a fantasy come true. She’s very smitten,’ a source told the publication recently. ‘She’s obsessed with the family.’

Taylor was involved in romantic relationships with Jake Gyllenhaal, Joe Jonas and John Mayer in the past.Her loved ones are concerned about her habit of getting sucked into love so quickly.’She’s always rushing into love,’ a friend revealed.’We all wonder why she can’t take it slow.’