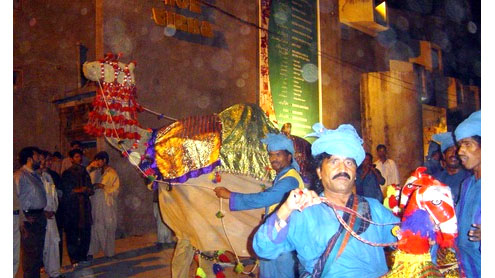 The event was organised by Lok Virsa (National Institute of Folk and Traditional Heritage) under its popular series ‘Documentation of Genealogical Musical Families of Pakistan’. Federal Minister for National Heritage and Integration Samina Khalid Ghurki was the chief guest.It was a well-attended show and a large number of people from different walks of life thronged the event and enjoyed brilliant performances given by the artist. Speaking on the occasion, Ghurki said, “Ministry of National Heritage and Integration and its component organisations, in particular Lok Virsa, would take all possible steps to document and preserve musical heritage of Pakistan, which includes folk and classical music.

Today’s concert with Rafaqat Ali Khan is an ongoing effort in this direction.” The minister said the PPP government had always tried to preserve Pakistan’s traditional culture and to promote traditional practitioners associated with them, including artists and musicians. She assured that this practice would continue in future as well. Explaining objectives of the programme, Lok Virsa Executive Director Khalid Javaid said that Lok Virsa launched a musical series of programme titled ‘Documentation of Genealogical Families in Pakistan’ with a view to encourage youngsters of the families of reputed musicians to continue to practice the art they inherited from their elders. “Actually, it is an initiative of Lok Virsa to pay tribute to the icons of Pakistani musical heritage,” he added.

He said that the first concert under this series was held in July 2010 and since then Lok Virsa is trying to focus on the services of artists hailing from different gharanas (schools of music) so as to ensure equal projection of the artists from each Gharana. Khalid, while acknowledging the contribution of the Norwegian donors in supporting the Pakistani culture, said, “We are highly indebted to the Norwegian government and its people for their continued help towards the promotion and preservation of Pakistani culture. We do hope that this spirit of cooperation will not only continue but also grow further in the time to come.”

Rafaqat Ali Khan is known through his own innovative style of music known as ‘classical pop’ singing. Belonging to the famous family of musicians, the Sham Chaurasi Gharana, his uncle, Ustad Salamat Ali Khan, and father, Ustad Nazakat Ali Khan, were the architects of their own gharana of kheyal gaiki and his great-grandfather, Mian Karim Buksh, was an outstanding dhurpad (the oldest surviving genre of classical singing in subcontinent) singer and the flag-bearer of the Sham Chaurasi gaiki, one of the four major schools of dhurpad in Punjab. – Dailytimes