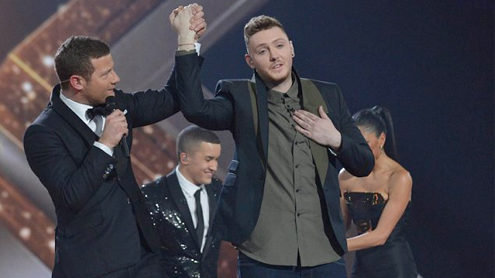 James Arthur is celebrating on Monday after being crowned the winner of X Factor 2012.

The 24-year-old put in the performance of his life in front of 10,000 screaming fans in Manchester to beat Jahmene Douglas to the coveted title.The Middlesborough-born singer earned a standing ovation from the judges and brought the house down with his incredible rendition of Shontelle hit Impossible, which is now odds-on to be the Christmas No.1 single.After gaining 54 per cent of the public vote and being crowned the winner, James struggled to speak as he was interviewed by Dermot O’Leary.

He could only manage: ‘Thank you, thank you so much. Have I really won? Wow. I don’t know what to say.’Runner-up Jahmene, who was also mentored by winning judge Nicole Scherzinger, was gallant in his defeat, and praised the show’s victor, telling Dermot: ‘It’s such a blessing to even share a stage with such a talent, he’s my idol.As the vote was announced, James looked stunned, before pulling in his competitor Jahmene for an emotional embrace.

Before performing his winner’s single one more time, James told Dermot he is thrilled that the proceeds of the record are going to charity Together for Short Lives.He said: ‘I’m so pleased it’s going to a good cause, thank you so much to everyone who voted for me – I’m so thankful.’

The X Factor victory then belted out the track, before being joined on stage by the majority of the rest of the show finalists, who hugged and jumped on James as they congratulated him.Before the winner was announced, James and Jahmene had treated viewers and the judges to two incredible performances.Former Asda worker Jahmene took to the stage first with his heartfelt rendition of Robbie Williams’ Angels – a performance which left the panel gushing.

Tulisa told Jahmene that he sounded ‘amazing’, adding: ‘I’m really happy you picked that song.’Meanwhile, Louis Walsh tipped Jahmene to win the show, telling him: ‘You are an incredible role model.’Gary Barlow also acknowledged Jahmene’s tough start in life, saying: ‘You have been battling with your past and fighting for your future you have done it with such dignity and grace.’Congratulations another stunning night for you.’

But Jahmene’s mentor Nicole struggled to control her emotions following the performance, breaking down as she listened to him sing.Following the song, Nicole told Jahmene: ‘You just bring spirit and hope to this song when you sing I just feel safe. Your my role model you are like a beacon of light. I love you sweetie..’James was next to take to the stage, performing his unique version of Marvin Gaye’s Let’s Get it On.

And the ladies’ man couldn’t resist a flirt with mentor Nicole during the peformance, holding her hand before moving on for a kiss with Tulisa.After the rendition, Louis told him: ‘You’re original, you are real, you are honest.’Tulisa was quick to liken herself to James, telling him: ‘I am going to say something to you now, James, which I know you will understand… I get you.’You are the same as me. We come from the same place.’

She added: ‘You deserve to win as an artist.’Gary, who has previously backed James to win the show, said that he didn’t need changing as an artist and he was ‘ready right now’ to release music.The panel were clearly moved by the emotional performance with Louis telling Jahmene he had ‘so much soul’, while Gary complimented his ‘unbelievable voice’.

Poking fun at Nicole’s now infamous made-up phrases, Tulisa then said: ‘That was a jahmazing shasmoment’. After performing the track, Jahmene was shown footage of his family talking about him, which left him in floods of tears.His mother was seen saying: ‘You have brought a lot of happiness to the family’, before adding: ‘You’re just an angel’.

James was up next with his version of Shontelle’s Impossible – his winner’s single.After the performance, Gary told James he was proud of him for not changing throughout the competition, telling him: ‘Please take one bit of advice never let anybody tell you what to do. You know best.’