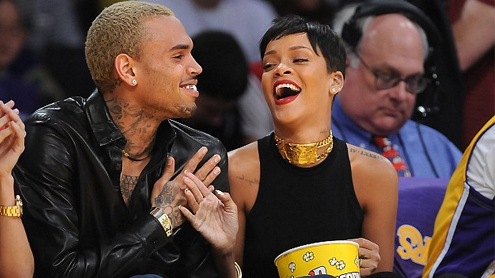 Rihanna and Chris Brown’s relationship is certainly complicated but, for now at least, it’s game on.

The Diamonds singer, 24, left Barbados to spend Christmas Day with the R&B performer, 23, in Los Angeles.The pair were spotted cuddling and flirting at the Staples Centre while watching the LA Lakers take on the New York Knicks.Rihanna was all dressed up for the occasion, wearing a black midriff-baring outfit, heels, gold choker necklace and red lipstick.She sipped beer from a plastic cup and seemed in good spirits as the pair kept close during the game.

They were among a host of famous faces in the crowd, including Snoop Lion and Red Hot Chili Peppers star Anthony Kiedis.While she didn’t comment on her romantic Christmas on Twitter, she did post was appears to be an old picture of herself wearing Santa hat and fatigues while with friends.She wrote: ‘Santa baby! Hurry down the chimney tonight! Is it too late to be nice?’Rihanna checked out of the Barbados home she had been renting in recent weeks on Christmas Eve and flew straight to California.

Her visit to her native island was not without drama – police were called to the property when a man was found trespassing over the weekend.Police in Barbados have since told TMZ that the man – believed to be a German national – mistook the private home as public property. He wasn’t arrested.The volatile couple reconciled earlier this year even though Chris is still on probation for beating her up in 2009.But the status of their relationship recently been the topic of speculation following a series of cryptic tweets from both parties.

Rihanna took to her Instagram account on December 18 to post a message which appeared to confirm reports the couple had split.She wrote: ‘Being single sucks. The only thing I get to do anymore is whatever the f**k I want to do.’It followed claims the Sweet Love rapper partied with scantily-clad female models and lunched with ex Karrauche Tran while Dubai.But both Rihanna and Chris later posted old pictures of themselves together, hinting that they were missing each other.

In an interview with Oprah Winfrey, Rihanna described Chris as the ‘love of my life’ and opened up about her complicated feelings for the man who was convicted of assaulting her.She revealed she had forgiven him for the brutal attack and felt she was the only one who could help him.She admitted: ‘I thought I hated Chris and I realised it was love that was tarnished.’It looked like hate because it was ugly, it was angry, it was inflamed, it was tainted and I realised that what it was. I had to forgive him because I cared about him still. And the minute I let go of that, I started living again.’ – Dailymail