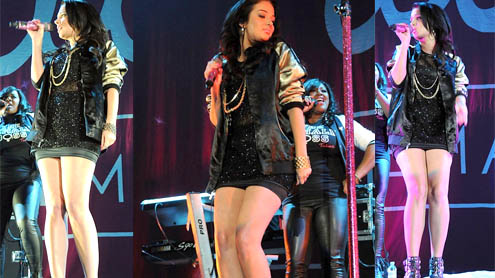 She turned heads for all the wrong reasons when she took the stage earlier in the week in an unflattering outfit.

But it seems Tulisa is actually quite the fan of her mesh number, as she decided to wear it again when she took to the stage once more on Wednesday in Scotland.And trying to mix it up a bit she threw on a gold varsity jacket and some gold chains, but there was just no hiding that dress. The 24-year-old, who is currently supporting Ne-Yo in concert, slipped into the short dress as she took to the stage in Glasgow.The high-waisted item barely touched her thighs was teamed with a cropped top and the same sparkly mesh vest.

Her long raven dark locks had been styled in loose curls and despite saying earlier in the day that she had a hair cut there didn’t seem to be too much difference, suggesting she was in fact just messing about in her Twitpic. Following the show she tweeted: ‘Thank you Glasgow!! Next stop Birmingham then London 02 we will be seeing you Friday! NeYo Compound Conor Maynard.’

She then revealed she was unwinding with her trusty PA Gareth Varey, writing: ’Back on the tour buss!! Birmingham see you tomorrow! Until then it’s me, the I pod and Gareth Varey michelle platnum and the band!While she is enjoying touring with her solo album, her position on the X Factor is said to be uncertain and reports claim that Simon Cowell is looking to replace her.

She had a meeting with X Factor producer Richard Holloway recently and a source told the Mail: ‘She’s realistic that she might not be back but Richard was very positive about her and said no final decisions had been made.’Amid the craziness in her life career-wise Tulisa was recently reunited with her long lost brother after a five-year search. Earlier this month Tulisa told fans about the meeting and posted: ‘Tulisa said in a statement: ‘I’m so happy to finally meet my brother. This has been a very important weekend for my family.’Neil, 35, tracked down his father Plato Contostavlos before contacting his famous sister.Plato fathered Neil when he was a schoolboy and it only emerged that Tulisa had a mystery brother in 2011. – DailyMail