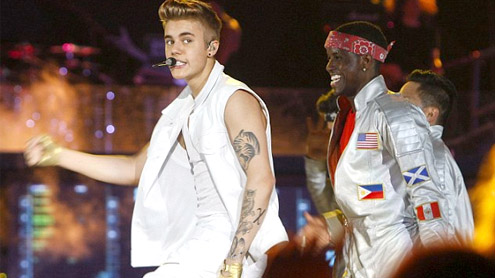 A crazed fan stormed onstage and grabbed singer Justin Bieber from behind on Sunday in Dubai during the middle of a piano performance.

The 19-year-old Canadian pop star was performing one of his last songs, Believe, when a youth in a white shirt and jeans blindsided the unsuspecting singer.Bieber managed to free himself and dashed to the side of the stage.Security guards rushed the stage and lunged at the attacker, according to a report in Dubai English language newspaper The National.The stage stormer pushed the piano off its hinges and it fell damaged to the stage.

A video posted by a fan online showed security guards rushing around the stage as the piano lay upturned.An accompanying tweet said: ‘Whoa. Crazy fan tackled @justinbieber and knocked the piano down the stage. Mayhem.According to reports, Bieber was rattled, but he and his eight-piece band finished the song while the offender was taken off the stage.After a three-minute break, Bieber returned for an encore and finished the concert with Boyfriend and the finale Baby.

Bieber also performed on Saturday in Dubai as part of his international Believe Tour and pulled a song out of respect for the country’s Muslim culture.Bieber skipped the song One Less Lonely Girl because the state religion of Islam frowns upon men touching women who are not their relatives.The singer typically recruits a young female fan to join him during the song to flirt with onstage.The respectful move followed another thoughtful incident on his international Believe Tour that occurred recently in Turkey.The Boyfriend singer paused his show multiple times on Thursday to allow fans to step away for the Muslim call to prayer.

The star’s tour, however, hasn’t been without its rough spots.A show in Oman reportedly was cancelled because the nation deemed his act ‘too sexy.’The teen pop idol also drew ire for travelling with a Capuchin monkey named Mally that was confiscated by customs officials in Munich, Germany.Justin also skulked around London in March with his shirt off and had to be restrained by a member of his entourage when he appeared to lash out at a photographer.He also drew heat in some corners in April for writing in the guest book at the Anne Frank Museum: ‘Truly inspiring to be able to come here. Anne was a great girl. Hopefully she would have been a belieber.’ Some believed the singer’s remark was tasteless and disrespectful, though museum officials defended his sincerity.

Bieber was spotted letting loose in Dubai on Friday as he emerged from a nightclub dressed in black and ended up jumping on the roof of a white Range Rover.Justin has been touring in support of his Believe album released last June.Following his visit to Dubai and concerts in South Africa, the tour will resume in June with shows in the United States.In an odd coincidence, Motley Crue guitarist Mick Mars, 62, was knocked over on Saturday night by an overzealous fan and was hauled off by security, according to a report by TMZ.

The band was performing the song Primal Scream at the Spectra Place in Canada when the man bolted across the stage, bowled Mars over and made a run at lead singer Vince Neil.The band stopped to make sure that Mars, who was celebrating his birthday on Saturday, was not hurt before resuming the show. – DailyMail