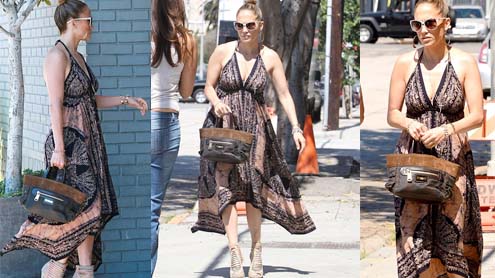 She debuted a chic summery dress on Saturday which suited her well.And apparently, Jennifer Lopez must have really, really liked that dress.

The very next day, the stylish 44-year-old stepped out in the exact same one – in a slightly different colour – as she headed into a Hollywood studio for a Sunday recording session. Jennifer was the epitome of summer-chic with a touch of hippie flair in the ornately patterned maxi dress.Sunday’s choice was a blend of black and pink, which she teamed with stylish beige sandals and shades.

And Saturday’s choice of attire for the famed songstress was almost identical.J-Lo wore exactly the same lightweight dress, only this time yellow replaced the pink and she wore noticeably different platforms and shades.But the dress, her hoop earrings and a neatly pulled back up-do remained intact, as the star clearly realised she was onto a winning combination.And it’s no wonder Jennifer replayed the day’s look, because it flattered her beautifully.

The Love Don’t Cost A Thing singer had just arrived at a Hollywood recording studio, joined by her younger sister Lynda Lopez who accompanied her.Once inside, it seems Jennifer spent a little time in a studio with the one and only Robin Thicke, as her sister Lynda pointed out with a Twitter snap of the pair dancing side by side.Whether it was for work or play, the pair looked to be having a whale of a time in the darkened room full of switches and keyboards.

Aside from exciting things apparently happening in the music studio, the star is set to return to American Idol.As the MailOnline exclusively reported earlier this month, Jennifer has been paid a whopping $17.5m salary to return as a judge on the talent show next season.That pay day is a nice jump up from the $15m check she received for her last season. – DailyMail