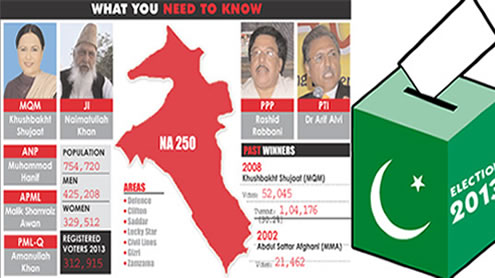 KARACHI: A tough contest is expected on NA-250 in the metropolis, as this hot seat has never been a confirmed slot for any party, not even for the party that holds Karachi as a political fortress.

Shujaat had won this seat in 2008 general elections by securing 52,045 votes; PPP leader Dr Mirza Ikhtiar Baig got 44,412 votes to secure second spot. However, JI had boycotted the polls. It is pertinent to mention here that in 2002 elections, Abdul Sattar Afghani had won elections on this seat via the Muttahida Majlis-e-Amal’s platform.

In election 2002, MMA candidate Abdul Sattar Afghani won NA-250 seat by securing 21,462 votes. MQM leader Nasreen Jalil stood second with 19,414 votes, while PPP Dr Mirza Ikhtiar Baig received 12,105 votes. A total of 69,235 votes were cast in the elections, voters turnout remained 33.7 percent. No party has managed to secure a lead of 10,000 votes in this constituency, which is a unique fact as other constituencies report a difference up to 1,000,000 votes between the winner and runner-up candidate.

According to JI leader Naimatullah Khan, “We gave Karachi package to citizens and the city was greatly developed. We will pull the nation out of energy crises and will focus on education.” He has urged people to cast votes to JI for the betterment of our nation. NA-250 constituency consists of Defence, Clifton, Saddar, Lucky Star, Civil Lines, Gizri and Zamzama areas. The people of this constituency are well educated and apparently they could judge well. – Dailytimes