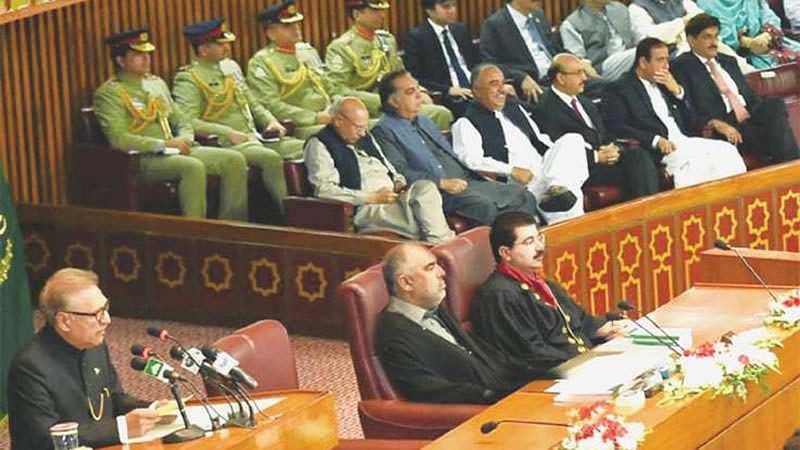 President Dr Arif Alvi has summoned an emergency joint sitting of the two houses of parliament on Tuesday (today) to discuss the situation developed after the Indian government’s decision to revoke the special constitutional status of Jammu and Kashmir.

According to an official notification issued on Monday, the joint sitting of the National Assembly and the Senate will be held at 11am.

“This House may discuss the recent surge in unprovoked firing and shelling on civilian population and use of cluster bombs by Indian forces in Azad Jammu and Kashmir; deployment of additional troops and atrocities in Indian-occupied Jammu and Kashmir and recent developments,” says the agenda issued by the National Assembly Secretariat for the joint sitting.

The members of parliament are also expected to pass a resolution to condemn the Indian government’s action at the conclusion of the sitting. It is not clear if the government plans to continue the joint sitting for one day or two days. However, since Deputy Speaker Qasim Suri had earlier adjourned the National Assembly sitting till Thursday, it is unlikely that the joint session will continue for more than two days.

The demand for convening the joint sitting had been made by the opposition parties soon after the media broke the news in the morning that Indian Home Minister Amit Shah, who is also president of the ruling Bharatiya Janata Party, had moved a resolution to revoke the special status of held Kashmir and a bill to bifurcate the state into two union territories to be directly ruled by New Delhi.

Pakistan Peoples Party chairman Bilawal Bhutto-Zardari was the first opposition leader who had called for immediately summoning the joint session of parliament. He then flew to Islamabad from Karachi to participate in the joint session.

The opposition leaders are expecting that Prime Minister Imran Khan will also attend the sitting as the Kashmir issue was above all political differences.

The National Assembly session was adjourned till Thursday morning without taking up any agenda item within minutes with the deputy speaker announcing that “it will be inappropriate for the assembly to hold the regular sitting in the wake of the latest developments.”

Mr Suri read out a statement soon after the recitation of Quran and playing of national anthem about the situation in India-held Kashmir and informed the members about the government’s plan to convene a joint sitting of parliament to discuss and devise a strategy against “India’s condemnable step to end the independent status of Jammu and Kashmir and ongoing oppression against Kashmiris”.

He said India had staged a “drama” and was dropping cluster bombs on the civilians living in Azad Kashmir along the Line of Control. “The elected representatives of Pakistan reject the steps taken by India and the whole nation is condemning the Indian aggression and change of status of Kashmir by India,” he said before announcing the adjournment.

The opposition had been agitating against the speaker over the delay in issuance of the production orders for the six legislators presently under detention on various charges.

Mr Zardari was also seen inside the Parliament House after the adjournment of the sitting, but the two PML-N MNAs were not present. They are expected to be present in the joint sitting on Tuesday.

The speaker has so far not issued the production orders for PML-N MNA from Faisalabad Rana Sanaullah and two independent members from Waziristan Ali Wazir and Mohsin Dawar.

Rana Sanaullah is currently on a judicial remand in a narcotics case, whereas Mr Wazir and Mr Dawar are in jail for allegedly attacking a check-post in tribal areas.