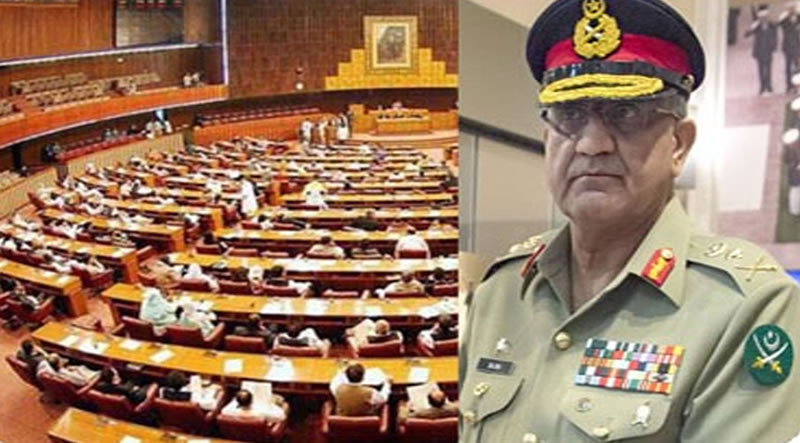 The National Assembly on Tuesday approved three bills regarding the tenure of the services chiefs — chief of army staff, chief of air staff and chief of naval staff — and the chairman of the joint chief of staff committee.

Ahead of the session, Prime Minister Imran Khan arrived at the NA.

Later, Defence Minister Pervez Khattak requested the PPP to take back their recommendations regarding amendments to the bills “in light of the regional situation”.

“Keeping in mind the situation in the country and the new situation in the region and after consulting with the rest of the opposition, […] in order to send a unified message, we (PPP) have decided not to press these amendments,” he said.

Speaker Asad Qaiser conducted a clause by clause reading of each bill, one after the other, putting them up for a voice vote.

Despite religious party members, including Jamiat Ulema-i-Islam-Fazl (JUI-F), Jamaat-i-Islami and representatives from the erstwhile Federally Administered Tribal Areas (Fata), walking out of the NA declaring the lower house to be “fake”, all three bills were approved.

In a tweet, a North Waziristan MNA Mohsin Dawar said prior to walking out of the National Assembly, they had voted against the Pakistan Army (Amendment) Bill 2020.

“This parliament acted like a rubber stamp. Speaker didn’t even allow the few dissenting voices to make their case. This is one of the darkest days in Pakistan’s parliamentary history. It will take a long time to recover from this,” he said.

The session was adjourned till 4pm on Wednesday.

A meeting of the PML-N parliamentary group was also held before the session. Meanwhile, a government delegation met with PPP Chairperson Bilawal Bhutto-Zardari in his chamber, DawnNewsTV reported.

A day earlier, the National Assembly’s standing committee on defence unanimously approved the bills during an in-camera session, an indication that the government and opposition had reached an accord on the passage of the bill.

“The amendments were passed unanimously by the body. I congratulate the entire country and the opposition parties,” Khattak had said.

According to the expedited timeline agreed between the opposition and the government, the amendment bills will also be introduced in the Senate later today before being referred to the upper houses’ defence committee, which is also expected to endorse the bills. The Senate is likely to vote on the bills on Wednesday after which they will finally go for presidential assent.

The Supreme Court had while deciding on the legal challenge to the second tenure for Chief of Army Staff (COAS) Gen Qamar Bajwa asked the government to define the tenure, terms and conditions of service of the army chief and to get their approval from the parliament within six months.

In an unusual haste, the federal cabinet had approved the proposed amendments at an emergency session last Wednesday.
Controversy over govt haste to pass bills

The lower houses’ standing committee on defence had deliberated upon the bills for a second time on Monday after their approval in less than an hour at a joint meeting of the Senate and National Assembly committee members on Friday had sparked controversy.

When the opposition had protested over the “undue haste” being shown by the ruling coalition, the government had to postpone the sessions of the two houses convened for Saturday. The government then agreed to a new timeline on the demand of the opposition parties.

Responding to a journalist’s question, Khattak had on Monday said all political parties are on the same page regarding the matter.

“No one has backtracked, we should avoid rumour mongering. All political parties are on the same page and are standing alongside the armed forces,” he had said.
Expected amendments

As per the amendments approved by the NA committee, the appointment of the services chiefs and chairman of the joint chief of staff committee would be the prerogative of the prime minister and his decision to appoint, reappoint or extend the tenures of chiefs and the chairman cannot be challenged in any court of law.

The upper age limit for a four-star appointment has been fixed at 64 years in the case of reappointment and extension, otherwise, the officer will retire at the age of 60 years.

Federal Law Minister Farogh Naseem had briefed members of the NA standing committee on various aspects of the three bills.

While talking to the media outside Parliament House on Monday, Bilawal said his party had presented three amendment proposals before the NA committee as well as in the National Assembly Secretariat.
The extension conundrum

Prime Minister Imran Khan had previously extended Gen Bajwa’s tenure through a notification in August 2019, but the top court suspended it on Nov 26, 2019, due to irregularities in the manner of extension.

After three days of heightened uncertainty, the apex court, through a short order on Nov 28, 2019, had announced that Gen Bajwa would remain the COAS for another six months during which the parliament would legislate on the army chief’s extension/reappointment.

In its detailed verdict released on Dec 16, 2019, the top court had emphasised that it was up to the parliament to carry out legislation that would provide “certainty and predictability” to the post of the COAS for all times to come.

“We would like to emphasise that this crucial matter of the tenure of COAS and its extension, which has a somewhat chequered history, is before the Parliament, to fix for all times to come,” wrote Justice Syed Mansoor Ali Shah — a member of the three-judge bench which heard the case — in the court’s 43-page judgment.

“It is now for the people of Pakistan and their chosen representatives in the Parliament to come up with a law that will provide certainty and predictability to the post of COAS, remembering that in strengthening institutions, nations prosper.”

In the wake of the apex court’s order, the government had introduced the three bills regarding the services chiefs’ tenures in the National Assembly on Friday.

Iran retaliates with missile attack at US bases in Iraq

Iran retaliates with missile attack at US bases in Iraq