The Arab street has found its voice 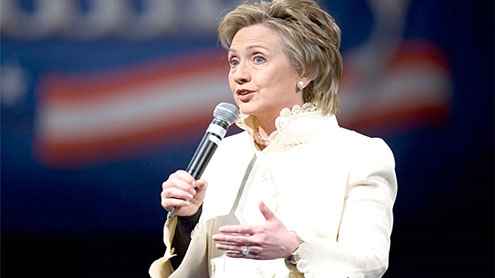 The greatest tribute you could ever crave is to get it from your detractors. So when Hillary Clinton admits that “viewership of Al Jazeera is going up in the United States (and around the world) because it’s real news,” the Qatar-based television network has every reason to celebrate and pat its own back. Speaking before the Senate Foreign Relations Committee last week, the US secretary of state warned that America is “losing the information war,” citing the superior quality of Al Jazeera as one of the reasons for her opinion.Clinton compared the Middle East-based TV network with the giants of US media outlets saying: “Like it or hate, it (Al Jazeera) is really effective. In fact, viewership of Al Jazeera is going up in the US because it’s real news. You may not agree with it, but you feel like you’re getting real news around the clock instead of a million commercials and arguments between talking heads and the kind of stuff that we do on our news which, you know, is not particularly informative to us, let alone foreigners.”Hmm. This is what many in alternative media and numerous independent conscience keepers of the world have been saying for years. I mean, the bit about the unwillingness and inability of Western media, especially of those in the US, to see the whole picture and tell the other side of the story.The US media has been too busy acting as the mouthpiece of the American empire and protecting the interests of the rich and powerful like those big boys of the Wall Street who continue to party Recession or no Recession. In fact, as a friend wrote this week commenting on Clinton’s speech, the US newspapers have become newsletters of the US government.This is why it is gratifying to see the world’s most powerful woman work herself up over the growing reach of Al Jazeera and its ability and courage to offer “real news” as it happens – and in the process probably an alternative to the overbearing loudspeakers of the US media.It’s amazing what a critical difference a single voice of sanity, however frail, could make in the Goebbelsian cacophony of lies, half-truths and shameless spin. And what a fantastic journey of sheer courage and chutzpah – and of course loads of hard work and persistence – has it been for Al Jazeera.

It has changed the rules of the game not just in the incredibly dull world of the Middle East media but is forcing the movers and shakers of the world media to watch their step and constantly read and revise their script to keep pace with the change that the Doha-based network has come to represent. Al Jazeera has not just emerged as the real voice of the Arab street, it is pitching itself as a healthy, credible alternative, even if still hopelessly young and green, to the apologists and cheerleaders of the empire. Which has been hard to miss for anyone following the whirlwind of change that has turned the Arab world upside down.A great deal has been written and said about the role the Internet and social media networks such as Facebook and Twitter have played in sowing the winds of change across the Middle East. Doubtless, the history of popular uprisings in the region – in fact the history of our times – will remain incomplete without the amazing contribution the Net has made. However, Al Jazeera had been there, long before the FB and Twitter arrived in the Middle East, educating, informing and fashioning public opinion across the Arab and Islamic world.

In fact, by faithfully and courageously reporting the dramatic, lightning developments in Tunisia, beaming the action right into millions of homes across the Middle East and around the world minute by minute, it unleashed the tsunami that swept away Egypt’s Hosni Mubarak and now threatens many of his fellow travelers.With its unvarnished and unedited reporting of the ground-shifting developments in Tunisia and Egypt, it created a template of change, a truly democratic and homegrown model, suggesting to the rest of the Muslim world they deserve better. That peaceful change is possible – without the intervention of our manipulative Western friends or the cynical, diabolic extremism as championed by the likes of Osama Bin Laden.As a student of media and someone who has avidly followed Al Jazeera’s breathtaking journey, it’s uplifting to see a little known television network, once identified as the mouthpiece of OBL, grow from strength to strength and take on the Goliaths of this world.In a region where the media have long come to act as the hand maiden of governments and journalism has largely meant publishing and broadcasting of endless comings and goings of royalty, Al Jazeera came as a burst of fresh, life-giving air.

While rest of the pliant, media establishment obsessed over what is known as “protocol news”, Al Jazeera, in the words of its boss Wadah Khanfar, looked for “the real actors. We have been guided by a firm belief that the future of the Arab world will be shaped by people from outside the aging elites and debilitated political structures featured so disproportionately by most other news outlets.”It kept its ear to the ground, listening to the drums beating in distance. This is why all those Western wonks and professional pundits failed to see the wave of change spearheaded by the Internet generation of young Arabs, dangerously aware of their democratic rights as well as the hopeless inadequacy of their elites, Al Jazeera saw the Arab revolt coming, as Khanfar so modestly claims.It has exposed the shenanigans of both the corrupt, authoritarian regimes in the neighborhood and the terrorism and tyranny of big powers. From Palestine to Pakistan and from America to Australia, Al Jazeera has defied and demolished the lies and narrative of the empire. No wonder it constantly finds itself under attack from both brotherly Arab regimes and the bullies of the West.

While the Doha-based network has been repeatedly banned and harassed in numerous Arab countries, its journalists and offices have often found themselves in the line of fire, literally, of the Self-appointed champions of freedom and democracy. Amazingly, despite being funded by the Qatari government, a close ally of Uncle Sam, Al Jazeera has managed to jealously guard and maintain its independence so far. Which is how it should be.By the way, why can’t we have more Al Jazeeras out there? God knows we do need them more than ever. Instead of chasing those billion dollar mirages in the sand, why can’t Arabs invest more in the media? Instead of crying all the time about Islamophobia and negative stereotyping of Arabs and Muslims in Western media and popular culture, why don’t they do something concrete to address it?Al Jazeera’s success, especially that of Al Jazeera English, proves it’s possible to make professionally credible attempts on this front. If a tiny emirate like Qatar can do it, surely big boys like Saudi Arabia, Egypt and Turkey could do it. Even if 5 percent of what many Muslim countries spend on the expensive junk sold by the West as arms was devoted to developing world class media, universities and research institutions, they wouldn’t be stuck where they have been. For those who control the media will control the mind – Arabnews