The spirit of Ramadan 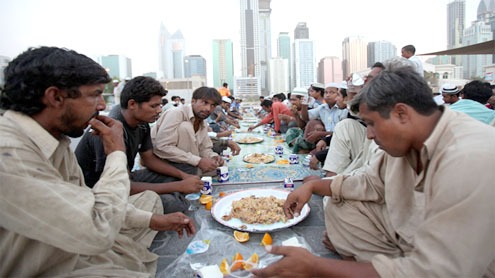 It was in the second year of Hijra that fasting during the holy month of Ramadan was made obligatory for Muslims.It came after the institution of prayer and is the third of the five pillars of Islam (the other four are: faith in the oneness of God and the last Prophethood of Muhammad [peace be upon him], prayer, zakat and Haj).

The glory of the holy month is manifest in the fact that God chose it for the revelation of His scripture. It was, therefore, in Ramadan that the first ray of Divine light fell on the holy Prophet’s mind, and Gabriel made his appearance with the greatest Divine message. The holy month, which witnessed the greatest spiritual experience of the holy Prophet (peace be upon him) was, thus, considered to be the most suitable time for the spiritual discipline of the Muslim community, which was to be effected through fasting.

Fasting in Islam is primarily a spiritual discipline in that it aims at attaining nearness to God. Fasting awakens in man a new consciousness of a higher life, a life above that which is maintained by eating and drinking, and this is the spiritual life.The benefits of the  blessed month are deep and wide. The abstention from food, drink and other material pleasures for the long hours between dawn to dusk is an act of self discipline by which an individual  asserts his or her ability to gain control over material pleasures and habits. The act of fasting also help break such habits and make it possible for the individual to conceive of adopting the most suitable course of action, undeflected by the fear that force of habit or the strength of material attraction will prevent its implementation.

On the social level, the community-sense of those who fast and break their fast together is greatly heightened, and a necessary element  for concerted social action is added. To truly develop and strengthen the personal aspects of character, they must find a social field of action. The traditional value of kindness, honesty, tolerance, generosity and justice can only find expression in a social dimension — kindness to others, honesty to other and so on.

It is possible only when an individual possesses an awareness of how the other person feels and thinks. Often enough the other person’s thoughts and feelings are heavily overlaid with privation through necessity; and fasting enables us to understand  the reality of that privation more keenly.Building a better society based on social justice for all can only be achieved by those who  understand the imperatives that privation evokes.

However, it would be a misunderstanding of the nature of the development which fasting inculcates to think that the change is dramatic. Often enough, to begin, fasting merely arrests the drift into increasing lack of discipline and only slowly turns the tide in the direction of increasing discipline of the self. The rigours of abstention may initially provoke a reaction of indulgence in the evening; an understanding of the less fortunate may appear, at best, a faint glimmer in the early phases of the change to fasting. Only over a period of years does the change and development of character assumes a more decisive phase.

Ibn Khaldun, in his Prolegomena, describes this progression through various ‘stages’ and the difference between the knowledge of an attribute and the possessing of it. He gives us an example, the first stage is generosity and compassion when a person talks about the commendable nature of mercy to the orphans and the poor, but in actual practice shuns the orphans and the poor that he or she encounters.

Then comes a stage when the orphan and the poor are approached and assisted when such assistance is sought. This stage is then followed  by one in which an individual is generous without being asked, when he or she searches for suffering in order to alleviate it. Then comes an even higher stage, when such assistance is given indifferent as to whether gratitude or criticism is received in return, or whether it is welcomed or repulsed.

But to achieve any of these higher stages of any virtue or facet of character, Ibn Khaldun observes that this is not achieved by mere knowledge, but by an action which must be repeated innumerable times — this alone leading  to a firmly rooted habit, to the acquisition of the attribute and, indeed, to real knowledge.Thus, to depreciate the benefits of fasting because of the conduct of an individual one knows who fasts is to ignore the relevance of that individual’s own inner development through the years. He may not possess very impressive self discipline today, but in all probability he possessed even less in the past. ‘Islam,’ as a saint once put it, ‘is an aspiration and not an achievement. – Khaleejnews