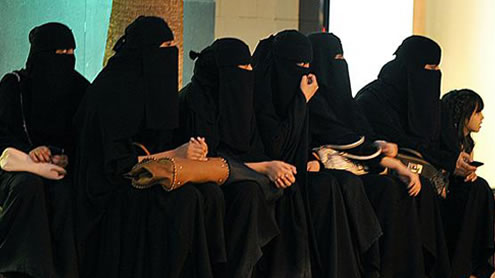 Social media was abuzz with excitement at Saudi King Abdullah’s recent decision to appoint women to the Shura (consultative) Council and to allow them to vote and run in the 2015 municipal elections. The right to vote and hold public office has been at the top of Saudi women’s demands for the past decade and has been widely discussed in social and traditional media. If you enter the world of social media and search for Saudi women, you’ll see that they are discussing politics, economics, religion, literature, television programmes and other diverse topics  and not only ones concerning women. In fact, they are examining issues you might have assumed they were unaware of from watching Saudi television or reading Saudi newspapers, where women’s opinions are generally ignored.

It began a few years ago when female writers, frustrated by censorship and restrictions in traditional media, created their own blogs and web pages to express their opinions more freely. With the introduction of Facebook, Twitter, YouTube and other social media, it became easier to exchange ideas quickly, raise awareness and launch campaigns to demand that women’s rights be recognised. The recent ‘Women2Drive’ campaign on Facebook and Twitter and the video posted on YouTube by activist Manal Al-Sharif, in which she is driving her car and calling for Saudi women to be granted the right to drive, received wide attention and reignited momentum around an issue that had been out of the media for some time.

Saudi female writers and activists have created Yahoo and Google groups to share articles or news stories, exchange ideas, circulate petitions and decide on strategies for addressing key problems. These groups are only open to members and therefore their users are less likely to get unwanted attention than those of public social media sites. New media has another advantage: it has forced traditional media to take up issues they might have been reluctant to address before, namely women’s issues. As they grow increasingly concerned about readership and impact, traditional media outlets are under pressure to keep up with people’s demands for freer and bolder platforms. More and more traditional media outlets are looking to new media to gauge opinions and highlight topics important to their readers.

However, new media has its downside. In such an unrestricted space, where all kinds of information and opinions circulate, it is easy to spread rumours and misinformation. Another downside is that campaigns in the virtual world do not guarantee success or necessarily translate into action in the real world, as was seen in the recent campaign to get women in the country to drive on 17 July. Few Saudi women actually heeded the call, begun through social media, to drive on that day. A combination of media and awareness raising campaigns in both traditional and new media, and lobbying government institutions and officials, would be more effective in bringing about real lasting change. Western media’s coverage of Saudi women is a double-edged sword. Although Western media tend to be stereotypical and superficial in its coverage of Saudi women, primarily covering the driving ban, veiling and gender segregation, it also brings international attention to women’s issues, which puts pressure on public authorities. This dynamic was evident in several high-profile cases, such as the woman who was forcefully divorced from her husband because of ‘ancestral incompatibility’ even though she was happily married with two children. She was imprisoned and the case was widely covered by national and international media. After two years in jail, she was granted a royal pardon and returned to her husband.

Saudi media outlets have become more courageous in recent years, taking up controversial issues, including women’s issues. And local media outlets are often the first to report on most, if not all, of the stories picked up by the international media. However the absence of women from the decision-making process and senior editorial positions limits their say in how women’s issues are covered and presented. As a result, blogs and social media remain the most common outlets where Saudi women express themselves, bypassing the remnants of censorship in Saudi media and the problematic ways that Western media sometimes frame issues. A recent online campaign that is gaining support is focused on revoking the requirement of male guardianship over women’s official, business and personal matters ñ an issue that many Saudi women feel is at the heart of the discrimination and injustice they face. It is a start. But in order for this online campaign to gain traction in the real world, it must reach traditional media and result in real action through an active civil society. – Khaleejtimes