Flood affectees of Sindh: On the lookout for mine and your Help! 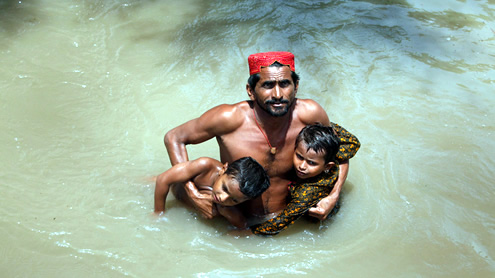 This year around, floods in Sindh alone have created double the havoc that the destructive floods last year created over the entire nation. The pain is double, the misery is relentless and the disaster scale is inexorable; yet it takes more than TV or newspaper news to move the citizens of this country to provide help for the distressed.

The floods of 2010 were recorded as being the worst flood to hit this nation in its history of 65 years; but the massive scale of destruction that this year’s floods have claimed are equally disturbing, if not more. Last year’s floods saw an enormous number of people; government and civilian, reaching out to the distressed and the distraught and helping them enormously in their need of hour. People from all walks of life; from political leaders such as Imran Khan to celebrities such as Noori to common youth of Pakistan; setting up NGO’s to rehabilitate and recuperate the affected was a heart-warming welcome change in the otherwise unaffected winds of this country. The nation stood up as a whole to instigate the notion that when it comes to help and mercy and pity, we do have a human heart.

This year around though, the picture is entirely different. The need of the hour is that we stand up once again to restore the affected people’s faith in their country and to step forth and claim personal responsibility for their recovery. This is the right time to turn the push into a shove and really, sincerely and exceedingly help our fellow citizens. Instead of relying on help from the outside world, standing up and claiming responsibility for your own citizens is what needs to be done. The government is doing whatever it can to recuperate and recover the losses of people’s lives, infrastructure, livestock and cattle but still, every single person needs to pitch in and work for the betterment of these people, and the society at large.

Last year on national TV, a flood affectee, while pointing at the sky, proclaimed that “jis ne mushkil di hai asaan bhi wo hi karay ga.” (He who has given us this test will ease it out too). This Positive energy needs to be rekindled and regenerated in the common man so that the faith of the affected flood people can be ascertained. – Zainab Tariq

13 hazaras barbarically gunned down in outskirts of Quetta

13 hazaras barbarically gunned down in outskirts of Quetta