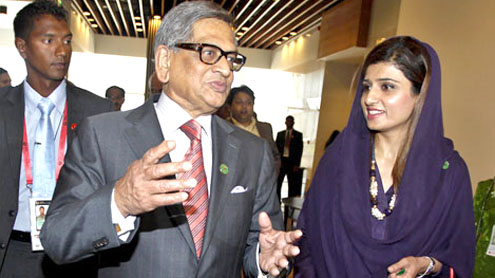 For the time being the dogs of war are on a leash. And there seems to be some sliver of sanity on both sides of the border that attrition is now detrimental to progress and 60 years of cultivated and harvested hostility has kept India and Pakistan in third gear.

The price for that is being paid.One of the reasons why the current splash of warmth and togetherness is holding sway is ironically because neither nation has the capability to fight a major conventional war. There are too many uncertainties, paramount among them the cruel fact that there is no soldier or officer on either side who has seen combat. These are both peacetime armies and they are not exposed to battle conditions.

By that very token if the manpower is untried, so, too, is the weaponry. How efficiently will it actually work in a prolonged state of combat? As much as the Americans don’t really know what will happen if they ever activate their nuclear silos, Indian and Pakistani forces have no idea what will work under the stress of war and how high will be the efficiency levels of man and his machine. It could be ludicrous.

And since, for now, the sniping sound bites of war are off the table why not seriously pick up the peace pipe and take a puff? After all, the hatred and the hostility have been basically political weapons designed to get parties elected on anti-neighbour manifestos or give the Generals in Pakistan an excuse to roll the tanks. Indian Generals, in comparison, are non-political and happy with a sinecure… a post retirement position in the public sector or a governorship. Except for General B.M Kaul’s abortive sortie in the Nehru era when he was hoping to capitalise on a deal with China’s Chou En Lai to ‘win a mini war’ and ride home a hero ready to take over the sagging reins of government in Nehru’s hands, no other four star officer has even made a cursory bid.

The point then is whether something as simplistic as 60 years of brainwashing by subsequent governments is now actually so much and so virally in our blood can peace ever be durable? Both have learnt the lessons well. Talking of peace is betrayal. Burying the hatchet is cowardice and anyone brave enough to say it is time to sit down and end the nonsense is a traitor and will be so branded. This insidious philosophy has worked.

Against this backdrop it is relatively understandable why neither country has had the capacity or the sagacity to live in peace. The present rhetoric of Gilani and Manmohan Singh and the echo of affection by the top level bureaucrats has endured more than a passing phase which gives grounds for some hope that some barriers will come down. Usually, the pleasantries conclude with the summit and both nations go back to aggressive postures. The July talks between India’s External Affairs Minister S M Krishna and his Pakistani counterpart Hina Rabbani Khar, led to a decision relaxing permit conditions for travel by people of Jammu and Kashmir to the other side of LoC  through six-month multiple entry visas and this is a positive move.

But unless the two place a severe timeline on their efforts a passing sincerity will not be enough. We do not need another stopover on Vajpayee’s bus. Whether it is business galvanised by the Most Favoured Nation status granted to India or tourism or the arts, sport or student exchange programmes this is the time to make the moves and bring down the mental equivalent of the Berlin wall. If either side drags their feet this latest initiative will be just another pile of debris on the road to peace.

One of the major obstacles is the number of people who continue to preach the gospel of divisiveness. These elements take pride in an undergraduate and immature thought process. We can beat you, we will beat you, we are more powerful than you. With elections in both countries now beginning to move from distant future to pretty soon  the danger of derailing the process at any juncture is very high…because it can be done by half-truths and innuendo and deliberate sabotage.

This sentiment forms an integral part of national pride and patriotic fervour. It began in the aftermath of 1971, grew through the Simla agreement of 1972, survived eleven high level meetings and eighteen summits, was sanctified in Agra during Musharraf’s visit, and now is still  reasonably well and thriving (if dormant for now) in Islamabad, Delhi and every city, town and hamlet in both countries.

It might be naïve to record this sentiment but perhaps the salvation lies in the new hi tech generation who don’t want to die gloriously in some unknown battlefield but would rather just get on with life and enjoying it. Shades of that new thought are appearing. You can see it in capsule when even an Indo-Pak cricket match excites vague interest and not neurotic loathing. You can see it in bilateral expat populations where work and play together is without rancour.

The media, which was once a culprit in keeping the nations book-ended has also given up its sabre rattling and become more amenable to the relative dullness of peace as a news seller.It has been said that commerce is the best foundation for peace. If you do business as one you can’t be hostile and profit wins the day. Which is why the new equation must be swiftly cemented.

The first five steps towards making this friendship work are:

Making travel easy and reducing the humiliation in the reporting process. After all, the strictures are intended to police each other’s citizens in this era of terrorism and the terrorists still get in through porous borders. Perhaps traditional hospitality from both sides will be a better deterrent than border patrols. It is not clever to suggest that tourism defeats terrorism.Use the arts liberally. De-politicise performers and make them brand ambassadors not enemies of the state because they cross the border.

Get the financial private sector agencies and associations to establish codes of commerce and up the import and export limitations as well as a corresponding reduction in the paper trail and red tape.A true sharing of intelligence and data between police and crime agencies to make both nations that much more secure. The more the two countries share the better their bulwark against insurgencies.At the political and bureaucratic level there should be accountability for promises kept and promises broken.

All initiatives should be moved forward in fast phase mode and not shunted to the sidelines.Stop with the pretty speeches and who know, one day this might be the route to settling the spiky Kashmir issue without blood and gore seeing as how the frontal option has failed spectacularly and only spun off more shrapnel. – Khaleejnews