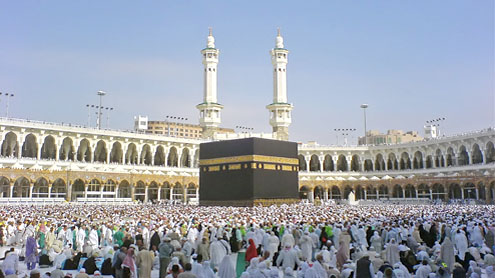 Prophet Muhammad (peace be upon him) was the most successful man in the entire human history. Being the last Prophet of Islam, he not only set a good example for the whole mankind but also showed to them how to achieve success in this world.

To see advantage in disadvantage was the Prophet’s second important principle, says Khan. In the early days of Makkah, there were many problems and difficulties. But a verse in the Qur’an, “With every hardship there is ease, with every hardship there is ease,” (94:5-6) inspired Muslims. They learned from the verse that if there are some problems, there are also opportunities at the same time. “And the way to success is to ignore the problems and avail the opportunities,” Khan points out.

Changing the place of action was another principle, which is derived from the Hijrah. According to Khan, Hijrah was not just a migration from Makkah to Madinah but was a strategic move by the Prophet to find a more suitable place for Islamic work.“Make a friend out of an enemy” was the fourth principle, which the Prophet learned from the Qur’an, which enjoined upon him the return of good for evil. The Qur’an then added, “You will see your direst enemy has become your closest friend” (41:34). “It means that a good deed in return for a bad deed has a conquering effect over your enemies,” Khan wrote in his article.

After the Battle of Badr, about 70 of the unbelievers were taken as prisoners of war and many of them were educated people. The Prophet announced that if any one of them would teach 10 Muslim children how to read and write he would be freed. This was the first school in the history of Islam in which all the students were Muslims and all the teachers were from the enemy rank.

Here comes the fifth principle: Wring success out of failure.The power of peace is stronger than the power of violence is the sixth principle. When Makkah was conquered, all of the Prophet’s direst opponents were brought before him. They were war criminals, in every sense of the word. But the Prophet did not order to kill them. He simply said: “Go, you are free.” The result of this kind behavior was miraculous. Most of them embraced Islam.

No to dichotomous thinking was another principle of the Prophet. “In the famous Muta battle, Khaled bin Waleed decided to withdraw Muslim forces from the battlefield because he discovered that the enemy was disproportionately outnumbered. When the Muslim forces reached Madinah, some commented “O Furrar” (deserters). The Prophet said “No. They are Kurrar” (men of advancement).”

Those Madinah Muslims, who commented wrongly about their forces, were thinking dichotomously, either fighting or retreating. The Prophet said no. There is also a third option, and that is to avoid war and find a time to strengthen yourself to make a powerful comeback. History tells us that the Muslims, after three years of preparation, advanced toward Rome and won a resounding victory.

To bring the battle in one’s own favorable field was the Prophet’s eighth principle. Before the Hudaibiyya Treaty the unbelievers were determined to engage Muslims in fighting, because obviously they were in an advantageous position. But the Prophet, by accepting their conditions unilaterally, entered into a pact. It was a 10-year peace treaty. Until then, the meeting ground between Muslims and non-Muslims had been on the battlefield. Now the area of conflict became that of ideological debate. “Within two years, Islam emerged as victorious because of the simple reason of its ideological superiority,” the scholar said.

Gradualism instead of radicalism was the ninth principle, which is well-established by a Hadith reported by Al-Bukhari. Ayesha says that the first verses of the Qur’an were related mostly to heaven and hell. And then after a long time when the people’s hearts had softened, the specific commands to desist from adultery and drinking were revealed in the Qur’an. “This is a clear proof that for social changes, Islam advocates the evolutionary method, rather than the revolutionary method,” Khan explained.

To be pragmatic in controversial matters was another of the Prophet’s important principles, he said. During the writing of the Hudaibiyya Treaty, the Prophet dictated these words: “This is from Muhammad, the Messenger of God.” The Quraysh raised their objections over these words. The Prophet promptly changed the word and ordered to write simply Muhammad son of Abdullah. This pragmatic approach adopted by the Prophet brought peace and prosperity for Muslims and accelerated the propagation of Islam. – Arabnews