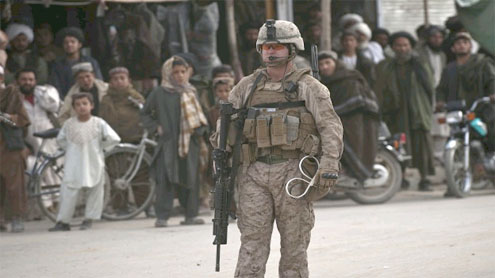 Ten years after the fall of the Taliban, the horrific attack in Kabul on Shiite worshippers, in which nearly 60 people were killed, bolsters the prevailing perception that the Afghan War is a hopeless conflict with no end in sight.

Politicians from across the political spectrum in the United States and other states that supported the mission are rushing to the exit door amid mounting public opposition and deteriorating economies. Despite these perceptions, Afghanistan is not a lost cause. But it continues to be an uphill struggle, because the nation has not yet achieved a level of sustainable progress that would guarantee long-term security and self-sufficiency.

The attack makes it clear that the insurgency likely will not be defeated by December 2014 when full transition to Afghan control is scheduled. The objectives must be to downgrade the insurgency to the point where it is no longer a threat to the Afghan state, and Afghanistan never again serves as a safe haven for extremists. As the international mission’s size and scope decreases over time, a long-term international commitment beyond transition is required.

In retrospect, there is plenty of room to spread blame, both internal and external, for failures and shortcomings. While Afghanistan, with international assistance, has been trying to engage in critical state-building since 2001, President Hamid Karzai has often hampered this process. His announcement that he would resign by 2014 provides relief to many  — but much damage, possibly permanent and irreversible, has already been done.The Western orientation and emphasis on the importance of the central government was misguided from the start. Only a bottom-up — not top-down — approach with an emphasis on robust local government can guarantee long-term stability.

Before the 1979 Soviet invasion, the Afghan central government mobilized resources and security and recognition of local authority. Real decision-making was traditionally at the local level. The Soviet invasion turned this structure upside down.Greater progress in Afghanistan is likely to be achieved more by muddling through on an ad hoc basis than it is by Western-style master plans and statistical targets. It is more realistic to judge progress within the context of evolving Afghan dynamics than through the expectations of Western policy-makers.

I recently traveled to Afghanistan as a guest of the NATO-sponsored Transatlantic Opinion Leaders delegation.  NATO gave us access to the highest officials to gain detailed understanding of the operations and mission there.The bottom line is that desired change requires time and patience.  However, the United States, which provides most of the Afghan funding, and allies are running out of patience and have economic woes of their own.

From 2001 to 2009, the international mission was disjointed and plagued by inefficiency. The year 2009 marked the surge, the first real concerted effort to turn the tide through a comprehensive approach.Although its primary purpose was to buy time for Afghan security forces to build up, it included a considerable civilian component. The architect of the surge, retired Army Gen. Stanley McChrystal, recently said  the coalition was “a little better than” halfway to achieving its military ambitions.

A long road lies ahead. President Karzai admitted his government and NATO have “failed to provide Afghans with security.”  Ultimately, whichever side can provide security will prevail. But security is not just physical protection — it also includes access to jobs, opportunities, health, education and credible dispute resolution.There have been positive developments. On the military front, recruitment and training of security forces has improved.  The attrition rate has lowered from 70% to 20% for the Afghan National Police and 30% for the Afghan National Army. Better pay and working with international forces have contributed. But expanding training and mentoring programs beyond 2014 is critical.

Combat operations involving Afghan troops and international forces is proceeding gradually, but at a constructive pace. This has been marked by considerable advances in southern Afghanistan over the past year. More effective night raids, accompanied by lethal drone attacks, have played a key role.Outreach to different insurgents and neighboring states is critical to Afghanistan’s long-term stability.  The reconciliation process has suffered from major reversals, including the recent accidental killing of more than 20 Pakistani troops by NATO and the assassination of Burhanuddin Rabbani, the former Afghan president and head of the High Peace Council.

The threats and challenges to Afghanistan’s future that have emerged over the last 10 years include ethnic strife, corruption and criminality, insurgents’ external sanctuaries, undermining by neighboring states and dwindling staying power of the international mission.But the greatest threat to the country’s future economically and otherwise may be insufficient development. Afghanistan’s poor oversight of its banking system and fraud at Kabul Bank, the country’s largest private bank, led to millions of dollars in losses.

The International Monetary Fund stopped its credit program for more than a year. Despite the IMF’s recent decision to renew its Afghan operations, this scandal caused long-term damage to Afghanistan’s credibility with international donors and lenders. It has strengthened Afghan-fatigue and the reluctance of financially strapped Western governments to give more money.The common refrain is that Afghans need to assume greater responsibility. Fundamentally, this is correct and is the principal guarantor of long-term stability.

At the recent Bonn conference on Afghanistan’s future, President Karzai renewed his pledge to fight corruption.  For optimists, this is better late than never.  For pessimists, it is too little, too late.  Realistically, there is no other option but gradual transformation through consistent international engagement, detached from political calendars.