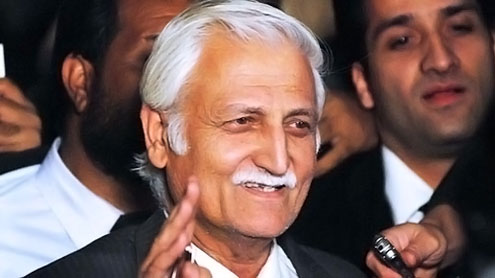 After the army chief met his putative boss last week after a long interval, presidential spokesman Farhatullah Babar assailed accounts of what had passed between them with what could be described as a quadruple whammy: “The reports, without quoting [a] source, are hypothetical, based on conjecture and in the realm of speculation.”

The trouble, of course, is that all too many of the reports emanating from Pakistan fall into one or more of those categories. One of the more obvious causes of this phenomenon is the tendency of official spokespeople to be frugal with the facts. Sometimes the simplest of questions elicits an absurd response. For instance, after Asif Zardari last week succumbed yet again to the “Dubai chalo” urge and, contrary to fevered speculation, returned from the private visit the following day, his spokesman, asked whether the president was concerned about the national political crisis, pithily responded: “Absolutely not. Why should he be?”

Perhaps he should be because almost everyone else in the country is. He may have nipped down to Dubai in a vain attempt, inter alia, to demonstrate his nonchalance, yet might not relish being typecast as the Alfred E. Neuman of Pakistani politics – particularly in view of that earlier “What, me worry” moment in the aftermath of the worst floods in the nation’s history.

The confrontation between the federal government and the military high command seemingly waxes and wanes from day to day—providing plenty of scope for speculation. Harsh words alternate with conciliatory signals. A coup of sorts still appears to be in the offing, and the Supreme Court’s issue of a contempt order against Prime Minister Yousuf Raza Gilani may well mean that the first act of a tragic farce will be wrapped up in the next few days.

The issue in question here is the National Reconciliation Ordinance pushed through by Pervez Musharraf and subsequently squashed by the court. Its judgment had some merit, but it’s hard to imagine why it would expect this—or any other—government to follow instructions that effectively entail picking up a firearm and shooting itself in the foot. Whether the Swiss authorities would heed a formal request from Islamabad to reopen a financial impropriety case against Zardari is far from obvious; what’s much clearer is the determination of certain players to find a way around his domestic presidential immunity. The hapless Gilani has reportedly been advised by senior coalition partners to heed tomorrow’s court summons. It promises to be a dramatic encounter.

The fallback for the powers that be is Memogate. It is hard to see how that sordid case could stand up in any court, given that the primary witness for the prosecution is so prone to contradicting himself. It has never been very clear what made Mansoor Ijaz decide, several months after having conveyed the memo in question, to go public about it. Was it a quest for publicity or self-aggrandizement? A threat or a prod from some direction? A response to a personal slight? Whatever the case, it can be argued that Hussain Haqqani deserved to be penalised for dubious associations, if nothing else.

More generally, there is no dearth of grounds on which the present government’s merits can be questioned. What’s easy to defend, however, is the concept that power—or, more precisely, political office—should change hands by democratic means. That, in the Pakistani context, would be a novelty worth striving for. Yet such a trend will prove impossible to establish as long as the army remains a key behind-the-scenes political player.

The periods of direct military rule that make up half of the nation’s history proved disastrous in various ways and to varying degrees. For the moment, though, the likeliest prospect appears to be a re-run of the insidious manipulation that followed the unprecedentedly bleak Zia era. True, the Benazir Bhutto and Nawaz Sharif governments that alternated in office in the 11 years from 1988, with barely a decent interval between them, were thoroughly undistinguished. Yet the rejoicing when Musharraf took over was entirely misplaced.

Perhaps the most bizarre coup of all was the one Musharraf carried out against himself in late 2007, is a desperate attempt to retain power. He has announced plans to return to Pakistan later this month to rejoin the political circus, although it is not clear in what capacity. Could a bout of imprisonment lend him a stellar glow? That’s doubtful—although stranger things have happened.

It’s hard not to sympathise with a palpable longing for an alternative to the shambolic status quo. The trouble is there’s no guarantee—or even a strong likelihood—that the next coalition to take office will be a substantial improvement on the present variant. That’s tragic, but if there is any way out of this conundrum, it lies in cultivating parliamentary democracy as a long-term habit rather than tolerating it as a fleeting mirage.

A compromise on early elections may be the least painful route out of the present crisis, but preventing its recurrence will require a great deal more. In the short run, can the judiciary be persuaded it’s only suffering an identity crisis—that it isn’t really the legislature? In the medium run, can the army be convinced to break off its illicit relationship with politics. In the long run, as J.M. Keynes famously put it, we are all dead. – Khaleejnews