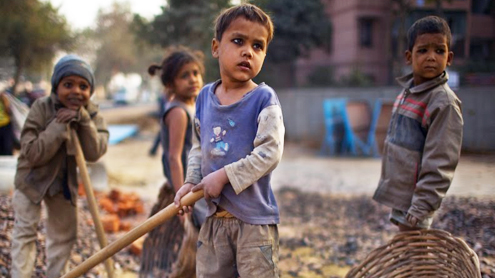 Intervention has become a trademark of international politics since the end of the Cold War, from Bosnia and Timor in the 1990s to Iraq, Afghanistan and Libya in the past decade. The cocktail of military action, aid and trade has decided the destiny of millions, but with limited ability to create long-term successes.

Many places targeted with intervention remain violent. Conflict and hunger — often unreported — continue to blight Africa.But another style of intervention may prove to be that elusive piece of the jigsaw puzzle on how a society moves from conflict and poverty to wealth and development — corporate intervention that targets those at the bottom of the supply chain rather than relying on the drip-down effect from the top.At the bottom are societies that deliver the raw materials for consumer goods filling stores in the West. But their citizens fail to share in the wealth, often working in appalling conditions, barely making a living. The most horrific example is the millions of children forced into work to produce cocoa for chocolate, cotton for clothing and coltan for cell phones — just to name a few products on shelves of glittering shopping malls across the world.

What’s long been seen as a humanitarian issue that percolates from time to time on television screens to pull at heart strings is fast becoming a commercial issue that risks profits.Attitudes towards abusive labour practices in many company boardrooms barely seem to have hanged for centuries. At the start of the 20th century, George Cadbury, founder of the chocolate company now owned by Kraft, persuaded Britain to boycott cocoa from Portuguese São Tomé and Príncipe because slaves were used in its production. Critics, however, have suggested that the boycott was timed to give Cadbury a commercial advantage.Today, campaigners are told that a boycott would harm the livelihoods of the very people it aims to protect, while damaging profits of a company that’s an investment for many consumers’ pension funds. At the end of that century, a series of investigations exposed brutal child slavery in the Ivory Coast in West Africa. Children were being trafficked to farms, shackled and their feet cut so that they couldn’t run away. Those who tried to escape were beaten.

Ten years after the agreement was made, in March 2011, a US-sponsored study reported that as many as 1.8 million children in Ghana and the Ivory Coast are involved in cocoa-related work. Many are at risk of being kept out of school, working in dangerous conditions. The report carried out by Tulane University, supported by the US Department of Labour, declared the industry’s efforts had “not been sufficient” and it needed to do more.A BBC investigation in November found children working throughout the cocoa belt, separated from their families, exposed to pesticides, using machetes with no protective clothing to harvest cocoa pods. Children appeared more prevalent among the workforce than they had been a decade earlier.This industry is not alone.Clothing brings in global revenue worth more than US$2 trillion a year. Yet most high street retailers and designers have little idea of where cotton comes from or how it’s harvested  and processed.

The supply chain includes the trafficking of children who work in factories where cotton dust causes the lung disease byssinosis — common during the industrial revolution after which similar working conditions were banned. Many clothing companies claim it’s not their responsibility, but that of suppliers and foreign governments, to ensure good labour practices. Until now, they’ve viewed social and environmental issues as irritants that cause higher costs and more constraints. They have created units dealing with corporate social responsibility, which are kept away from core business, channeled into a public relations machine aimed at maintaining reputation. It’s here that a sea-change may be unfolding.First, social networking and Internet transparency are making consumers more aware and, therefore,  more powerful.

Second, with expanding markets, companies need secure supply chains. For example, in the Ivory Coast, aging cocoa trees must be replaced. But farmers, kept impoverished by cocoa for years, search for alternative crops that can provide a better future for their families. The chocolate companies therefore need to provide incentives.Third, new buyers from countries such as China, Brazil and Russia view supply-chain security as fundamental to their own survival. They’re examining how to bypass traditional methods where the livelihoods of already struggling farmers are too dependent on unpredictable market fluctuations.It’s not inconceivable that over the next decade these newcomers will set up new, direct “source-to-store” supply chains to protect revenues.Until now, this had been the preserve of the Fair Trade movement, much derided by mainstream manufacturers.The question is how corporations will intervene to bring change.

If they’re to succeed, corporations and governments must work together on providing acceptable standards of schooling, health and transport. According to the United Nations, there are an estimated 150 million child workers between ages 5 and 14 years old worldwide. That is half the population of the United States who, instead of growing up impoverished and illiterate, could emerge within a generation as an educated force capable of transforming the international economy.

This would allow the poorest families to themselves become taxpayers, society stakeholders and consumers. – Khaleejtimes