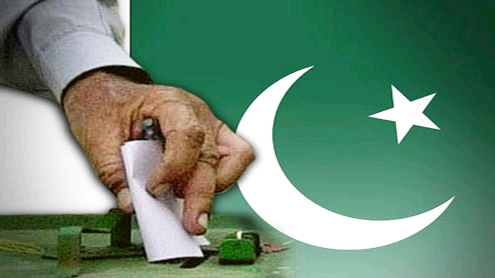 Last week Pakistan’s upper House adopted a key constitutional amendment after the government distributed millions of rupees of ‘development’ funds among the senators.

This is a telling indicator of what lies ahead in an election year. The use of public money to cement political support points to more  ‘political spending’ in the run up to the polls. A spending binge can be dangerous when debilitating domestic and external imbalances are casting a shadow over the country’s economic stability. The budget deficit has already ballooned to its highest level since 2008. Along with a deteriorating external position, this can push the economy to breaking point.Officials contest this scenario will materialise. They rule out spending overruns. But their record of expenditure restraint is far from reassuring. Government officials acknowledge that the economic situation is dire but claim it is manageable. They seem confident about papering over the economic cracks before the elections whether held this autumn or in 2013, also arguing that no crisis can emerge in this period.

They may well turn out to be right. But the question is at what cost? Policy inaction on urgent structural problems and flagging fiscal restraint in the face of electoral pressures can push fragile public finances into even greater disarray.  Postponing urgent budgetary decisions will entail serious consequences and present the next government with a bigger economic challenge – even a full-blown financial crisis.The country doesn’t have to look far to divine the deleterious consequences of a protracted period of policy inaction and fiscal indiscipline. Just four years ago the country came close to external debt default when foreign exchange reserves plummeted and the budget deficit reached a record high.

Both domestic and external factors contributed to the 2008 crisis. They included a sharply deteriorating balance of payments position due to a spike in international oil and food prices. In a year of political transition urgent decisions were postponed. Record budget and balance of payments deficits and erosion of confidence produced a foreign exchange crisis, which was resolved only by an emergency loan from the IMF.Can a fragile macroeconomic situation and decisions dictated by electoral considerations plunge the country into a crisis resembling that of 2008? What distinguishes the present situation from that in 2008 is the build up of foreign exchange reserves. This is also the prime reason for official complacency.

But several factors including the composition of reserves suggest that this confidence may be misplaced. The bulk of the  $12 billion reserves held by the State Bank is borrowed money. It includes $8 billion of an IMF loan, on which repayments have to be made over the next three years, starting with the first installment of $ 1.2 billion this month. This will begin to deplete the ‘cushion’ at a time of declining foreign inflows. Over the past six months the capital account of the balance of payments has been deteriorating as net inflows have tapered off. Meanwhile exports have significantly slowed down, net inflows have started to turn negative and external financing has sharply reduced. This will make it difficult to finance a larger current account deficit.

The government believes it will be able to secure alternate financing by for example collection of proceeds from privatisation and early resumption of US assistance. But these assumptions may not materialise in the time frame assumed by the government.What can also upset this fragile financial balancing is the already rising price of oil. The international price can rise more sharply if current tensions between Iran and the US escalate. A higher oil import bill will rapidly deplete reserves and intensify the danger of a balance of payments crisis.

This will compel going back to the IMF to escape a potential external debt default. Yet the government has neither prepared itself nor the public for this eventuality. The next government will have a daunting challenge to confront and will be constrained to make sharper policy adjustments while having to square this with heightened public expectations.The latest IMF report on Pakistan says that “A fundamental break with the past” is needed for policy corrections to establish macroeconomic stability. The question is who will make this change in policy direction? If the election produces another coalition will it ever be strong enough to do this? Or can significant reform only be undertaken by a government with a decisive majority – an unlikely election outcome on current projections. – Khaleejtimes