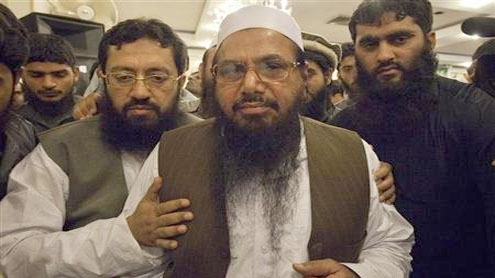 ISLAMABAD: An Islamist leader who had a $10 million American bounty placed on his head this week has been helping Pakistan de-radicalize militants under efforts to stabilize the strategic U.S. ally, a top Pakistani counter-terrorism official said on Friday.

Hafiz Saeed, suspected of masterminding an attack by Pakistan-based gunmen on India’s financial capital Mumbai in 2008 that killed 166 people, including six Americans, met government officials from the Punjab province and pledged his support for the drive, the official said.”Hafiz Saeed has agreed with the Punjab government programme of de-radicalization and rehabilitation of former jihadis and extended full cooperation,” the counter-terrorism official told Reuters.

The counter-terrorism official said that Saeed had not been paid for his de-radicalization activities.U.S. officials in Washington said the decision to offer the reward under the State Department’s longstanding “Rewards for Justice” program came after months of discussions among U.S. agencies involved in counter-terrorism.The $10 million figure signifies major U.S. interest in Saeed. Only three other militants, including Taliban leader Mullah Omar, fetch that high a bounty. There is a $25 million bounty on the head of al Qaeda leader Ayman al-Zawahiri.

The announcement of a reward for Saeed comes at a time of strained ties between the United States and Pakistan and is likely to increase pressure on Islamabad to take action against one of Pakistan’s most notorious Islamist leaders.A senior police official in Punjab province, who is closely involved with investigations into militant activity, confirmed that Saeed and his supporters were helping efforts to transform militants into law-abiding citizens.”Jamaat-ud-Dawa (JuD) were consulted, and they approved the de-radicalization plan. They assured us of their intellectual input and resource materials. They also offered teachers,” he told Reuters, referring to the charity Saeed heads.

International law does not prohibit the United States from paying money for information that may lead to the arrest of an alleged criminal, said Professor Sarah Knuckey of New York University Law School.Legal questions would arise if, for example, the United States set out to arrest Saeed on the territory of another state or targeted him for killing. “There should be more efforts to lawfully arrest and prosecute alleged criminals, instead of the use of drones strikes and targeted killings,” Knuckey said.

The bounty highlighted the divide between the United States’ direct approach to tackling militancy, and strategies employed by Pakistan, a nuclear-armed South Asian nation seen as critical to U.S. efforts to pacifying Afghanistan.While Pakistan has mounted offensives against militant groups like the homegrown Taliban, it also contends other tactics such as de-radicalization are vital to sustaining battlefield gains.

Yahya Mujahid, the JuD spokesman, said the group had not participated in the de-radicalization programme.Hafiz Khalid Waleed, another senior JuD member, declined to comment on whether the Islamist leader had been directly assisting the government in de-radicalization.But he said Saeed and his followers were promoting non-violence.”Hafiz Saeed was one of the first religious leaders to denounce militancy and suicide bombings,” said Waleed. “Our schools and madrassas (religious seminaries) are urging peace.”

Under the programme, former militants are urged to develop technical skills that could give them long-lasting employment to keep them from taking up arms against the state again.Experts also try to reverse what Pakistani officials call brainwashing by militants who preach holy war against the West.To help the deradicalization programme, Saeed identifies former militants who may still be recruited for jihad because they are jobless and idle and he helps steer them toward the programme, said the counter-terrorism official.

India maintains Saeed is a criminal and has long called for his capture, blaming the Lashkar-e-Taiba (LeT) — the militant group he founded in the 1990s — for the Mumbai carnage.The two nations have a tentative peace process underway with Pakistani President Asif Ali Zardari scheduled to meet Indian Prime Minister Manmohan Singh on Sunday, the first visit to India by a Pakistani head of state since 2005.

Pakistan is home to some of the world’s most dangerous militant groups, who carry out suicide bombings and beheadings in their bid to topple the U.S.-backed government. There are also less violent groups with the same aims.But many Pakistanis privately support Saeed’s animosity to India. The two countries were born out of the 1947 division of the subcontinent after freedom from British colonial rule and hundreds of thousands were killed in rioting at the time.

The bounty, which would be paid for information leading to Saeed’s arrest and conviction, however puzzled Pakistanis. His whereabouts are usually not a mystery. He wanders the country freely, fires up supporters at rallies and runs a huge charity.Waleed mocked the decision to place a bounty on Saeed.”President Barack Obama’s election symbol was a donkey and his government is acting like one. They have no evidence against Hafiz Saeed and are scrambling to make up stories,” he told Reuters.

Pakistani officials say Saeed, who Western officials suspect of links to al Qaeda, has the right to move freely because he has been cleared by Pakistani courts of a range of accusations.Saeed abandoned the leadership of the LeT after India accused it of being behind an attack on the Indian parliament in December 2001. But his charity is suspected of being a front for the LeT.He denies any wrongdoing and links to militants.Over 1,000 of Saeed’s supporters protested against the bounty on Friday.

Saeed agreed to support de-radicalization because he felt that former militants should find jobs and re-join mainstream society, said the counter-terrorism official, who has been at the forefront of efforts to fight militancy in Punjab.The counter-terrorism official, who engineered the project, said 200 former militants had participated this year in Punjab, Pakistan’s most populous province, including some from Saeed’s militant group.Another 100 will be completing the programme by June.Saeed, a former professor of Islamic studies at an engineering university, appeared at a press conference on Wednesday in the city of Rawalpindi, home to headquarters of the Pakistani army, recipient of billions of dollars in U.S. aid.

Flanked by some of Pakistan’s most virulently anti-American Islamists at a hotel about a 40-minute drive from the U.S. embassy in the capital, he taunted the United States.Saeed, a short bearded man, lives near a park and a mosque in a non-descript villa with a policeman stationed outside, in the central city of Lahore, capital of Punjab.Some of his bodyguards wear olive camouflage vests while others are dressed in dark traditional shalwar-kameez, baggy shirt and trousers. Clutching AK-47 assault rifles, a few are positioned on his rooftop watching the street.Saeed enjoys armed protection from the state because of his “new thinking”, sources said.”Al Qaeda or factions from the Pakistani Taliban may want to kill him,” said one of the sources, adding India may want to target him as well.Asked if the reward would anger Saeed’s followers and undermine de-radicalization efforts, he said: “There is resentment but I hope the programme won’t be affected.”  – Yahoonews