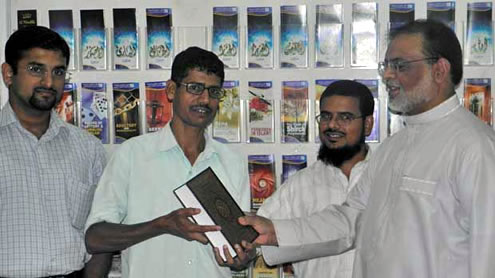 When Shivashan-karan, a young Hindu farmer from the south Indian state of Kerala embraced Islam, he had to face a lot of troubles and tribulations. Many forces from within his family and outside had tried to discourage him from accepting Islam as his new way of life.

But he stood steadfast in the new religion, which he embraced after studying the Holy Qur’an and reading Islamic books. Ever since he became a Muslim, he has been trying to bring his family members and close friends to the fold of Islam by explaining to them the important features of the divine religion.

Speaking to Arab News, he explained the circumstances that prompted him to embrace Islam. It began when he was a primary school student when his classmate Kareem used to tell him what he had learned from the madrassa (Islamic school), including the fundamentals of Islam, the concept of Paradise and Hell.

He was also aware of the importance of life after death. As a teenager he used to work for daily wages with other laborers. At that time he had seen the injustice being committed to those workers by their employers. “This strengthened my belief in the day of judgment because it is essential to punish corrupt employers for doing injustice to their poor workers,” he pointed out. When he was 32 another incident took place that strengthened his faith in God. A Muslim friend of him was practicing black magic in the neighborhood and he was against it.

Fearing that Shivashankaran’s challenge would affect his business, the magician warned him that a big catastrophe would befall on him within 90 days. “I was really afraid and prayed to God in the darkness of that night, raising my hands, to protect me from that man’s evil designs and punish him for his black magic. God heard my prayer as his magic did not affect me and was inflicted by the deadly disease of cancer. He was a strong man with a stout body and within 90 days he became a lean person. I never expected God would answer my prayer that quickly. He looked like a Satan and even his children were afraid of approaching him and he had tried to commit suicide twice before his death.”

After having strengthened his faith in God and the Hereafter, it was easy for Shivashankaran to understand the Qur’an when a Muslim friend gave him the holy book to read. Soon after becoming a Muslim, Yahya (his new name) started propagating the faith among his family members, starting from wife, sisters and daughters. His wife and a sister have already declared their Shahada, pronouncing there is no god, except Allah and Muhammad is His Prophet, in addition to four friends. When his family saw him reading so many books on Islam, they were suspicious about his plan. When he told his wife and children about his plan to accept Islam as his new religion they threatened they would commit suicide. “By the grace of God I was able to overcome those difficult situations.”

Some family members with the support of local Hindu leaders threatened either to kill him or break his bones. “But God gave me the strength to face those threats, and I have been praying for my brothers and sisters to accept Islam to save themselves from the Hell.”

Yahya also explained how he changed the lifestyle of a Muslim gangster. “He was a drunkard and a powerful man. Everybody in the town feared him. When he heard me talking to another Hindu friend about Islam, he was amused to know what we were discussing. He also asked me to tell him more about Islam because he was not aware of its teachings. He offered me every support.”

When some Muslim friends asked him to declare Shahada in the beginning, Shivashankaran was a bit hesitant. He was thinking about the consequences and the tremor it would create in his house and family. Consequently, he read all available Hindu scriptures including Bhagavad Geeta and Mahabharat with the hope it would take him to the Paradise without embracing Islam. “I could not find anything in those scriptures that would save me in the day of judgment,” he said. However, it helped him talk to Hindu leaders with confidence when they tried to discourage him from becoming a Muslim. An avid reader of Islamic books, Yahya called upon his Muslim brethren to learn more about their religion by studying the Qur’an and Sunnah and set a good example to others through their lives. – Arabnews