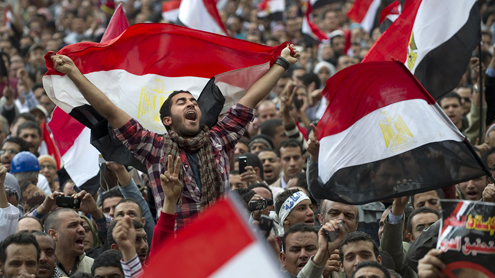 YOU ARE the authority, above any other authority. You are the protectors, whoever seeks protection away from you is a fool…and the army and the police are hearing me,” said Egypt’s president-elect, Mohammed Mursi, to hundreds of thousands in Tahrir Square.

A man imprisoned following the “Friday of Rage” (January 28, 2011) took the presidential oath in Tahrir on a “Friday of Power Transfer” (June 29, 2011). But he almost did not. Ten days earlier, on June 19, I was with a group of former Egyptian MPs in Tahrir Square. One received a phone call informing him that a senior Muslim Brotherhood leader was coming to announce that the group was being blackmailed: either accept the constitutional addendum decreed by the Supreme Council of the Armed Forces (SCAF), which practically eviscerated the presidency, or the presidential election’s outcome would not be decided in the Brothers’ favour.

An hour later, the senior figure had not shown up. “The talks were about to collapse, but they resumed,” said the former MP. “Hold your breath.” The victory of the Brotherhood’s Mursi in Egypt’s first free presidential election is a historic step forward on Egypt’s rocky democratisation path. His challenger, former President Hosni Mubarak’s last prime minister, Ahmed Shafiq, had no chance of winning a clean vote, despite the support of a huge state-controlled propaganda machine and various tycoons. “How many people can they trick, convince, or buy? We don’t have that short a memory,” a taxi driver told me when I asked whether he would vote for Shafiq.

Indeed, the Egyptian revolution has defeated Mubarak’s regime and its remnants three times since January 2011: first with Mubarak’s ouster, then in the parliamentary elections held earlier this year, and now with Mursi’s victory. And yet a military-dominated regime remains a real possibility. The series of decisions by the ruling SCAF just before the presidential vote clearly indicated that the military has no interest in surrendering power. The most radical of these decisions was to dissolve parliament, for which 30 million Egyptians voted, based on a ruling by a SCAF-allied Supreme Court. The junta then assumed legislative authority, as well as the power to form a constitutional assembly and veto proposed constitutional provisions.

It also formed a National Defense Council (NDC), dominated by the military (11 army commanders versus six civilians — assuming that the interior minister is a civilian). Meanwhile, efforts to clamp down on protests have continued. The justice minister, a Mubarak-era holdover, granted powers to the military intelligence and military police authorities to arrest civilians on charges as minor as traffic disruption and “insulting” the country’s leaders. Now the hard part begins for Mursi, who confronts an intense power struggle between the beneficiaries of Mubarak’s status quo — generals, business tycoons, National Democratic Party bosses, senior judges, media personnel, and senior state employees — and pro-change forces, whose largest organised entity is the Brotherhood.

The junta certainly has no intention of abandoning its vast economic empire (with its tax-free benefits, land ownership and confiscation rights, preferential customs and exchange rates, and other prerogatives). It has also no intention of surrendering its veto power, including over national security, sensitive foreign policy (specifically regarding Israel and Iran), and war making — hence the NDC. In the absence of a compromise — and forces that can guarantee its terms — polarisation can lead to bad outcomes, ranging in seriousness from Spain in 1982 to Turkey in 1980, and, most worryingly, Algeria in 1992, when the military regime’s nullification of an Islamist electoral victory touched off a prolonged and brutal civil war.

Although Egypt’s generals are by no means as threatened as their Algerian counterparts were in December 1991, they do have enough power to flip the tables. Depending on the outcome of the ongoing negotiations between SCAF and Mursi, the size of protests in Tahrir Square and elsewhere, and the degree of pressure from the international community, a deadly confrontation cannot be ruled out. The most likely scenario, however, looks something like Turkey in 1980: an undemocratic, military-dominated outcome, but no serious bloodshed. In this scenario, the current constitutional assembly would be dissolved, and SCAF would form a new one to its liking. It would strongly influence the constitutional drafting process in order to enshrine its privileges.

In other words, SCAF, not the elected president, would remain the dominant actor in Egyptian politics — an outcome likely to generate continuing resistance from pro-change forces. The best outcome — resembling Spain in 1982 — is the most optimistic. After the Spanish Socialist Workers Party (PSOE) won parliamentary elections and formed a government in October of that year, the right-wing military establishment accepted the new democratic rules of the game and foiled a coup attempt that sought to block the advance of the left. The PSOE also realigned the party along more moderate lines, renounced Marxist policies, and led a comprehensive reform program, El Cambio (the change).

In Egypt, a similar scenario would enhance the prospects of democratic transition. But the SCAF leadership shows no inclination to emulate the Spanish generals. The Muslim Brotherhood’s leadership, for its part, usually takes a risk-averse, gradualist approach to crisis management. Confronted by a revolutionary situation, however, that approach could be hard to maintain. Further progress toward democratisation would require Mursi to keep intact the broad coalition of Islamists and non-Islamists that brought him to the fore — and to sustain its mobilisation capacity in Tahrir and elsewhere.

Successful transitions from military to civilian rule in Turkey, Spain, and elsewhere partly reflected sustained American and European support. But, perhaps more than that, Mursi will need tangible achievements on the economic and domestic-security fronts to shore up his legitimacy at home. Otherwise, Egypt’s generals will not be returning to their barracks anytime soon. -Khaleejtimes