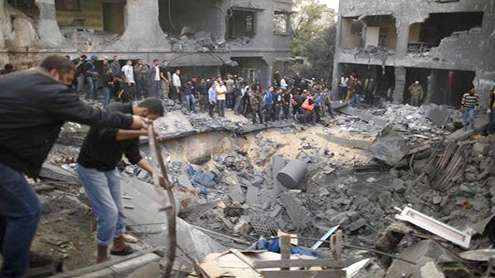 Year 2012 has faced some of the major sadistic outbreaks of the decade which are too ferocious for whole mankind. World today is leading towards destruction, conflicts, riots and wars which need to be settled down by devising an effective and persuasive peace policy.

Currently, the Israel invasion on Hamas in Gaza City, the increasing rocket-launching operations there in Palestinian territory has killed many along with the most senior Hamas military commander Ahmed Jabari. Israeli drones sending missiles in Gaza one of which hit the Interior Ministry of Hamas. The killings are estimated 30.

The ethnic and sectarian disputes in Myanmar due to Rakhine State riots have caused noxious massacre killings of Myanmar’s Muslim minorities. More than 170 adults and children are assassinated with almost 100,000 Rohingya Muslims kicked out from their homes which Aung San Suu Kyi calls “huge international tragedy”. Earlier, the contemptuous blasphemy acts on social networking sites and also the offensive trailer of the sacrilegious film “Innocence of Muslims” on YouTube erupted protests in Muslim world.

It only fuelled hatred for western world with several attacks on American consulates, the killing of the US Ambassador in Libya and escalating antagonism as reaction.Other than the self inflicted lethal global scenario, the biggest natural disaster of hurricane Sandy rising from the Atlantic coast flooded more than 24 states of America. Other than economic loss of $50 billion, the death toll was 209 in seven countries influenced by the super-storm.

When it comes to our homeland Pakistan, the target killings, drone attacks, suicide bomb blasts and ever increasing street crimes are also costing life of many common man and officials day to day. The death rate is reaching at its peak. Law and order situation is still a question. The flood victims of Hunza Lake are still homeless.Either it be natural calamity, racism and genocide, or the fights and war between states and government-human life is at highest risk. Death rate is growing higher and higher but intensified this year. The crisis are becoming worst and exasperating resulting in trepidation, abhorrence and bloodshed.

Though many peace keeping missions are undertaken by United Nations but all we need are more peace regulation codes, reformation strategies and tactics to promote reconciliation and overcome reluctance to cut down inter-human violence. We need to resolve conflicts at the personal, regional and international level and to respect Human rights. Policies should be improvised for social and economic welfare. Freedom of expression should be sustained with laws of forbidden hate speech. International relationships should be cultivated with effective truce to assure protection for all mankind – Lubna Khalil