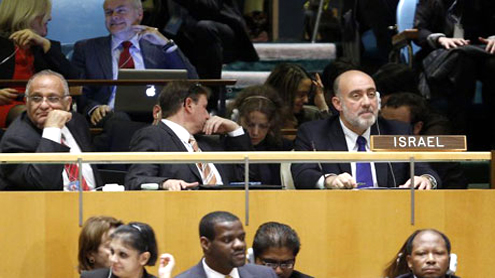 THE United Nations General Assembly vote last week on granting Palestine non-member observer status was timed to coincide precisely with the 65th anniversary of the UN vote that sanctified the birth of Israel.

It was not timed to follow hot on the heels of yet another Israeli military assault on the Gaza Strip. That was Benjamin Netanyahu’s contribution to the cause.It helped to concentrate minds. It is perfectly possible, of course, that the outcome would not have differed substantially in the absence of the latest intimation of Israel’s inclinations. After all, the official Israeli pattern of behaviour is well established and the so-called peace process has long been moribund.

Yet it’s likely that a relatively conciliatory stance on the part of Israeli officialdom may have prompted, at least, a marginally less decisive show of hands in the General Assembly. One hundred and thirty-eight UN members supported the Palestinian resolution, and 41 hedged their bets by abstaining — suggesting, in most cases, that while they might appreciate Palestinian aspirations, they could not quite bring themselves to defy Israel or, more likely, its godfather, the United States.

The British government may well have thought it was doing Israel a great favour by offering to support the resolution provided the Palestinians vowed to steer clear of the International Criminal Court (ICC) and the International Court of Justice (ICJ). Proceedings against it in either of these institutions are, of course, Israel’s greatest fear. The Palestinian Authority (PA) wisely refused to take the bait, and the UK abstained.

Australia’s Prime Minister Julia Gillard, meanwhile, was keen to join the naysayers, but her Labour Party’s parliamentary caucus as well as her cabinet favoured a contrary course of action. Canberra’s abstention was thus an undemocratic compromise.Had Gillard had her way, Australia would have joined the US, Canada, Israel, Panama and the Czech Republic as the only nations of any substance to vote against the resolution. The four other votes came from Nauru, Palau, Micronesia and the Marshall Islands, tiny Pacific states with a combined population of less than 200,000, three of them US dependencies.

“From the Israeli and American view,” commented The Washington Post, “that the international coalition is so small does not augur well for [the] Israel-Palestine peace process. But perhaps it also reflects the degree to which global opinion seems to be aligning in favour of the Palestinians — Europe’s much-watched votes are moving slowly but decisively in that direction — and away from the US-led peace process”.

Mark those words: the US-led peace process. It may be visible to the hawkish Post, but anyone with an unblinkered vision would find it extremely hard to discern. Most of those who thought they caught a glimpse of it in years gone by are now convinced it was a mirage.Any lingering hallucinations about long-term Israeli intentions ought to have been banished by its petulant reaction to the UN vote: the vow to expand Jewish settlements on occupied territory that, if implemented, would bifurcate the West Bank and completely block it off from East Jerusalem, and the decision to withhold from the PA the proceeds of taxes it collects on behalf of the authority.

Is there a glimmer of hope to be perceived in the fact that a number of European Union (EU) members — notably France, Spain and Denmark, which voted positively in the General Assembly, but also the UK — have politely reprimanded Israeli ambassadors over the settlements issue? Or that the US, too, has expressed its token displeasure?Not really, given that the extent of illegal settlements even before the latest move is widely deemed to have relegated the prospect of a two-state solution. The one-state alternative adopted as an ideal by gradually increasing numbers of those inclined towards an equitable outcome to the perennial dispute is easy to support in theory but no less hard to envisage as a foreseeable reality.

Opposition within Israel to its government’s obstructionist stance has meanwhile been diminishing. A recent opinion poll suggested up to 70 per cent of the population opposed the Gaza ceasefire. Whereas an allergic reaction to Hamas’s rockets and rhetoric is understandable, the deepening disconnect with reality is disconcerting.It has been suggested that indications of European displeasure will only reinforce the Israeli siege mentality. But then, similar arguments were offered by those who opposed any words or actions that might have offended the white minority in apartheid South Africa. They, including Margaret Thatcher and Ronald Reagan, were eventually overruled, and apartheid crumbled under the combined weight of international sanctions and moral outrage.

Chances are a comparable process could contribute substantially to altering the unbalanced Israeli-Palestinian equation.And let us not forget that the wider Middle East is in flux. As Hussein Agha and Robert Malley pointed out in The New York Review of Books last month, “Alliances are topsy-turvy, defy logic, are unfamiliar and shifting. Theocratic regimes back secularists; tyrannies promote democracy; the US forms partnerships with Islamists; Islamists support Western military intervention…”When the pieces eventually fall into place, one way or another, will the Israel-Palestine issue still be standing out as an ugly reminder of enduring injustice? – Khaleejnews