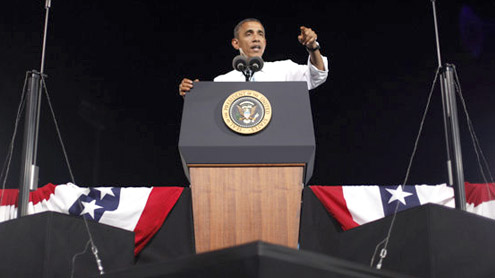 DESPITE ITS diplomatic pageantry the tripartite summit held at Chequers earlier this month between the leaders of Pakistan, Afghanistan and Britain hardly broke any new ground.

The joint statement issued after the meeting on February 3-4 called for talks with the Taleban. But this did not obscure the fact that no peace process is yet in place or agreement on how to start negotiations. This made the goal set in the communiqué to “achieve a peace settlement over the next six months” completely unrealistic.

The Taleban’s reaction to the London meeting threw this into sharper relief. Their spokesman Zabihullah Mujahid declared that the summit took no “practical steps to fulfill the pre-requisites for negotiations”.The Chequers declaration did, however, affirm the opening of a Taleban office in Doha. But this echoed the call made in a joint statement on January 11 by Presidents Barack Obama and Hamid Karzai during the Afghan leader’s visit to Washington.

What happened between the Washington parleys and the London meeting is instructive to recall for it lays bare the difficulties in even setting up an office, just the first step to establish a location for sustained peace talks.Behind the scene discussions to formally open such an office have been going on for over a year. They have involved direct exchanges between US officials and Taleban interlocutors, until the militia suspended the dialogue in March 2012. On various occasions Karzai opposed the office. This became one of the reasons why the embryonic Qatar process stalled.

In this backdrop, and with the US keen to revive the Qatar process, American officials prevailed on Karzai to publicly announce support for the Doha office during his Washington visit. But no sooner had he returned to Kabul that Karzai began setting terms for his support. He demanded a memorandum of understanding with the Qatar government and insisted it reflect several conditions. This included the stipulation that the Doha office be used only for talks between the Taleban and his government-appointed High Peace Council (HPC) and not between others, including various Afghan parties.

Qatar declined to provide these assurances while American officials tried to walk an increasingly insecure Karzai back to   commitments he made earlier.By the time the summit convened at Chequers, Karzai was reportedly persuaded to give up his MOU demand and approve the Qatar office without pre-conditions. But he continued to link the opening of the office to a prior statement from the Taleban iterating that the Doha office be exclusively used for talks with the HCP.

Pakistani officials urged Karzai not to place preconditions and instead proposed a sequence of steps, starting with the official opening of the office, followed by revival of talks between the US and the Taleban, and then talks among Afghans including members of the HPC. Karzai was not persuaded. This left the Doha office issue undecided.

This is not the only circle that needs to be squared. Among other ‘requirements’ for the Taleban office to officially open is the US insistence that before this the Taleban issue a statement denouncing international terrorism. By some accounts this was agreed early last year as part of several confidence-building measures both sides were to take when the talks broke down over Taleban accusations that the US had gone back on the agreed sequence of steps. American officials denied any timetable had been finalised.The question of ‘who goes first’ remains a key problem to address to get serious negotiations going. This has been the focus of continuing ‘talks about talks’ at several levels.

The Taleban’s core demand remains the complete withdrawal of foreign forces from Afghanistan. Thus their main focus is to secure American assurances in this regard. What is unclear is whether the Taleban would see assurances on this count as a pre-requisite for peace negotiations or are open to the possibility that such assurances would emerge as an outcome of negotiations. President Obama’s announcement in his State of the Union address to accelerate the pace of troop withdrawal this year could create space that might be helpful in future talks. But direct US-Taleban engagement has to first resume to determine that.

The London meeting served as a reminder that finding a path to the negotiating table remains an onerous task. Given the present impasse and decisions that Washington and the Taleban leadership have yet to take, progress towards a negotiated peace remains a more distant possibility than the hope expressed by the Chequers statement. – KahleejNews