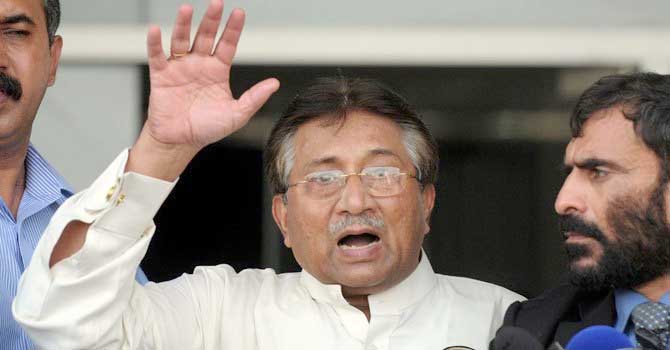 Musharraf’s time has come and so has Nawaz Sharif’s. Which historian of Pakistan would have predicted that the tables would turn on the general who disposed Sharif in such a way that the noose on Musharraf’s neck is now held by Sharif himself?

For the good three months since former dictator Pervez Musharraf returned to Pakistan in the hope of contesting elections as one of us ‘bloody civilians’, the verdict has been out: has the former dictator invited wrath on him or has he made an astute move?

Arriving after the caretaker government had taken charge, Musharraf miscalculated that the ‘likes’ on his Facebook page translated into popularity on the ground, and that the many who had taken to the streets in the Lawyers’ Movement in 2007 and the judiciary that he had ‘summarily dismissed’ had forgotten what they had gone through.

2007 was the time when lawyers were holding up photographs of the General-in-Command and hitting it with shoes. The protests on the street forced Musharraf’s hand and he let Nawaz Sharif and Benazir Bhutto return to Pakistan, having earlier sworn that neither would come back again. Bhutto’s return resulted in tragedy as she nominated Musharraf amongst those trying to assassinate her. The case is still dangling over Musharraf’s head and reason for his extended jail sentence at his Chak Shahzad Farmhouse.

Musharraf played a calculated hand. With Benazir Bhutto out of the picture and the Pakistan Peoples Party (PPP) and Pakistan Muslim League-Nawaz (PML-N) contesting elections on the shared agenda of the Charter of Democracy, Musharraf saw his chance and left with military honours. Already a darling of the West, he took up coveted seminars and began working with US think tanks. It appeared that the Commando had gotten a clean getaway.

For the general who was let go without the restoration of the 2007 judiciary, the scenario in Pakistan changed after his return. The judiciary that he had done away with under Chief Justice Iftikhar Muhammad Chaudhry was restored a year later with the PML-N leading the final charge.After its return it took on a more and more activist bent. Taking on cases, including the long buried Mehran Gate scandal, the missing persons issue and the Balochistan crisis, it brought the military into the dock a number of times, shamed it but did not pass any verdicts against it.

While much had been forgiven, it could not be forgotten that some of these were the same judges that had taken oath under the 1999 Provisional Constitutional Order (PCO) and later validated the coup d’etat by General Mush.This raises a number of questions about the trial. Now, when the same judges are asked to try Musharraf for treason, will their own 1999 judgment allowing the coup come under scrutiny? Or will the trial be limited to the events of 2007?

Musharraf subverted the constitution twice – and for a total period of nine years. The bulk of the current judiciary had served loyally for most of this period. Speaking in an ideal sense, if justice is to be had, then an independent judicial commission led by the surviving judges who refused to take oath on the PCO, should be asked to conduct an extensive trial that includes everyone, including judges.

Nawaz Sharif knows that political expediency at this point extends only to Musharraf. If coffins were to be dug up then it would include the foundations of his own political empire which was built on the shoulders of General Zia. And we also know now that Sharif’s 1993 Islami Jamhoori Ittehad (IJI) campaign was funded by the military top brass.

Another argument they present has truth. If accountability is to be extended to anyone and everyone who has ever aided and abetted a military coup, then none of the current status quo would survive. But then what is intrinsically wrong in doing so? If a cleaning up is required, then it might as well be thorough.Surely the larger message to be sent is the more important one: it is not just military generals that must be taken to task, the entire civilian machinery that sides by them; including judges, bureaucrats, politicians and let it not be forgotten the clergymen too, that need to be taken to task.

This is indeed the reason why, as Nawaz Sharif has indicated that Musharraf will be tried for treason, a number of lawmakers, including Maulana Fazlur Rehman have warned against the move. The All-Pakistan Muslim League (APML) spokesperson has also warned that a number of MQM and PTI lawmakers are on board with them in arguing that Musharraf should not be tried.

What contours the application of Article 6 shall take with the article reworded by the 18th amendment to include “those who support” the subversion of the constitution, are yet to have been clarified by the sitting government. But there is more to the matter than meets the eye.

Sharif is playing a very calculated hand. In keeping the defence and foreign ministries in his hold, Sharif is keen to avoid a repeat of the Musharraf coup of 1999. He sees the trial of Musharraf as a way to further secure for himself his political and industrial empire.But if the foundations of the empire are stirred then the hand of the military will be found to be the foundation. What a strange place then is Pakistan when an untainted citizen cannot initiate a treason trial against all dictators and those who have supported them.

As Musharraf readies himself for trial by lighting another cigar, I do owe him one little thank you. In imposing emergency on November 3, 2007, you made the divide between the military-walas and bloody civilians like myself clear for a generation that grew up on 1990s politician bashing and PTV-led military jingoism.Perhaps there is little I can change about the way the current treason trial shall be conducted. The entire edifice of power: the judges, the politicians and the military are all in cahoots.I can only leave with the question: how can judges, politicians and other generals be excluded from Musharraf’s treason trial? – PT