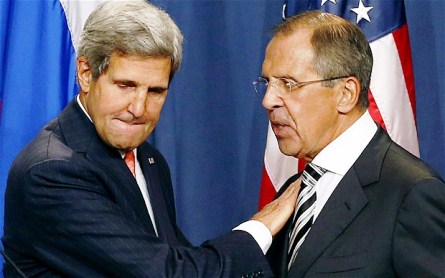 At the time of the Cuban Missile Crisis in 1962 when the Soviet Union secretly shipped into Cuba nuclear weapons and the US, under president John Kennedy, threatened to bomb them, the world came as close to nuclear war as it ever has. Robert McNamara, the then US secretary of defence, wondered if he would ever see another sunset. The crisis ended when Kennedy agreed, with only a handful of his inner circle knowing this, to remove US nuclear missiles in Turkey, which with their short flight times, threatened Russia as much as the Cuban missiles threatened the US.

Many years later in June 1982, after only modest progress in mutually reducing nuclear weapons on each side, around three-quarters of a million demonstrators gathered in New York’s Central Park demanding a freeze on nuclear weapon production. The New York Times reported, “it was the largest demonstration in American history”.

But in 2013, despite more cutting, the Cold War over, the two old adversaries still have 6,400 nuclear weapons. President Dwight Eisenhower, commander-in-chief of allied forces during World War 11, said that 20 would be enough for deterrence, which is self-evidently true when one considers that each submarine has 24 missiles, each with at least three multiple warheads, each 25 times larger than the single bomb that was dropped by the US on Hiroshima (many historians now say unnecessarily), eviscerating the whole city.

In fact a crippling nuclear attack could be carried out by “decapitating” the US, using only a dozen or so missiles. If Russian submarines (one would be enough) could manoeuvre to be closely off-shore, say within a thousand miles of the American coast in mid-Atlantic, it could take out Washington, the US nuclear command centre and most of the eastern seaboard’s power supplies after seven minutes of flight time. No president could digest the warning information coming into the White House (probably only five minutes before impact), check its accuracy (there have been so many false alarms) and then order retaliation.

Fortunately, thanks to the former Soviet president, Mikhail Gorbachev, we are past that point and, frankly, the two sides keep their bomb stocks more for macho show than use. Who is threatening whom? Neither.

We have played with fire for too long. Accidents and misreading have happened. A new book, “Command and Control” by Eric Schlosser records many instances of false alarms — some reporting massive full-scale attacks by the Soviet Union and vice versa. He tells the story of how in September 1983; the Soviet early warning system detected the launching by the US of a big attack. The duty officer, Stanislav Petrov (who later became a lieutenant colonel) took it upon himself not to pass on the information to his superiors who would have certainly ordered retaliation. He later told the BBC that if “I had sent my report up the chain of command, nobody would have said a word against it”. Instead, on his own authority, he reported a malfunction, even though he later admitted that at the time he was unsure that the alert was a false one. Another officer could well have leant the other way.

In 1961 a US bomber broke up over North Carolina. One of its bombs behaved exactly as it should, with its parachute opening and its trigger mechanisms engaged. Only one low-voltage switch prevented a cataclysm. Fallout would have spread over Washington, Baltimore, Philadelphia and New York. The Soviet Union, doubtless, has had its accidents.

General George Lee Butler who once headed the Strategic Air Command, the body that was responsible for implementing the president’s command to attack, and who later became a vigorous opponent of nuclear weapons, once said, “We escaped the Cold War without a nuclear holocaust by some combination of skill, luck and divine intervention, and I suspect the latter in greatest proportion.” Accidents are less likely to happen today but that doesn’t mean they couldn’t.

Unbelievably, Barack Obama and Vladimir Putin appear to have no plan to open negotiations on rapid reductions. Obama should announce, as did his predecessor, George Bush senior, that unilaterally he is getting rid of a significant part of the American arsenal. Putin would probably be compelled to follow suit. Why is nobody marching for this? As Kennedy once said, we run the danger of “turning this planet into a flaming funeral pyre”.

12 Pakistani IT Firms to Attend Gitex

12 Pakistani IT Firms to Attend Gitex