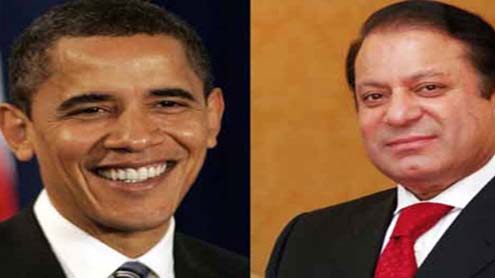 Nawaz Sharif was listened to. In the meeting on October 23, the patient ear of Barack Obama remained committed to Sharif. No doubt, Obama was also listened to by Sharif sympathetically.

Both leaders raised the concerns of their respective countries with each other. Both raised the issues of (mutual) interest affecting their countries. Both concluded the meeting on a happy note. That was how the famous ‘same page’ was reshaped once again between Pakistan and the US on which both countries, as implied, would try to stay as long as possible. Obama took the initiative to reconstruct the same page by inviting the newly elected prime minister of Pakistan and releasing the next tranche of military aid and the Coalition Support Funds amounting to about $ 1.6 billion.

The red carpet welcome (to appease the Mughal sense of Pakistanis) followed by a series of feasts (to calm down the taste buds of the Lahori guests) during Sharif’s stay in Washington were enough to express that the US intended to infuse a new spirit in its relations with Pakistan. A distinct feature of Sharif’s visit was the absence of any pledge made and any Memorandum of Understanding (MoU) signed between both the countries. It cannot be construed that there was nothing to promise; however, it can be interpreted that the bilateral relations transcended any promise or a show of intent.

The common ground that was found was terrorism; both leaders accepted the ugly reality of terrorism harming them, and both resolved to stamp it out. In this regard, the concern of Sharif was domestic. However, the context of terrorism was extended by Obama to include India and Afghanistan. Obama pressed Sharif to allay the fears of India and Afghanistan about the allegation of the export of terrorism from the soil of Pakistan. The meeting obviated the role of the bureaucratic wrangling between the two countries on diplomatic issues. The meeting met the expectations of making both leaders understand each other’s stances on various issues and the way those stances should be respected even if one country or the other disagrees.

Nonetheless, the issues raised by Sharif in his meeting with Obama portrayed clearly that Pakistan had finally found its lost confidence. The issues raised by Obama in the same meeting depicted vividly that the US had learnt to live with the reality called Pakistan. Though Sharif raised several issues, one issue might not have been understood by Obama: Pakistan should not be seen through the lens of Afghanistan. Obama must be asking himself a question: why should that not be the case? Was the expression of his thinking, the AfPak policy, flawed? It is apparent that the US has not been pressing now on the Afghan-Pak policy or, at least, the words pronouncing the name of the policy are not being used at the (US) government level. One can conclude that the US has been trying to jettison the vexations from its relations with Pakistan.

The Raymond Davis case emitted certain lessons to the US. One of the lessons was to take Pakistan seriously: don’t toy with the idea of considering Pakistan a lesser partner in the war on terror. The incident of the Salala check post and in its reaction the disruption of the logistical supply line (which passes through Pakistan) made the NATO countries cautious in their approach towards Pakistan: don’t flirt with Pakistan considering it a lesser neighbour of Afghanistan. Consequently, both the US and NATO abandoned being assertive, and both avoided opening any new front with Pakistan. In Sharif’s visit, the US found a face-saving opportunity to restore its relations with Pakistan, as these relations remained fragile since 2011.

To normalise relations was also important because the decisive year of 2014 was approaching. It might be a coincidence that Sharif, having a right-wing tilt domestically but a pro-US leaning internationally, has emerged as a representative of Pakistan in 2013. The US is not imprudent to let this coincidence go waste. In Sharif, Obama might be thinking to have found a person who could speak to the Taliban and convince them to let the presidential election take place smoothly, and offer an honourable exit to the US/NATO forces from Afghanistan. One embarrassment the visit was afflicted with was the exposé launched by the US media (especially The Washington Post) immediately after the Nawaz-Obama meeting.

Based on certain (leaked) intelligence reports and diplomatic memos, the Post revealed that the Pakistan government (both the political and military facets) was in consort with the US government on drone strikes from 2004 to 2013. With that, the anti-drone strike rhetoric is bound to be deflated in Pakistan. One can say that the disclosure will have repercussions for the forthcoming talks between the Pakistan government and the Pakistani Taliban. In a way, the anti-drone strike avowal of Pakistan has backfired. Sharif can save face by saying that he was not in the government when all that understanding developed and that his government will not endorse any such strike in the future. Nevertheless, the anti-drone strike resolve of Sharif will be put to the test domestically. Pakistanis are in the habit of seeing the visit in the context of (immediate and substantial) success or failure only.

They are oblivious of the fact that the visit (and the meetings) brought understanding in Pak-US relations. In fact, the bilateral understanding was revived. Secondly, Pakistanis are also in the habit of considering Pakistan’s relationship with any country in the context of either friendship or conflict. Given the warm welcome offered, given the invitations for flavoursome banquets and given the patient heed afforded to the cause of Sharif, it can be said that Pakistan and the US are now friends again, and are now on the same page. Nevertheless, it is yet to be seen if the same page survives the trial of the year 2014. -Dailytimes

Pakistani politician’s London mansion Becomes the talk of the Town