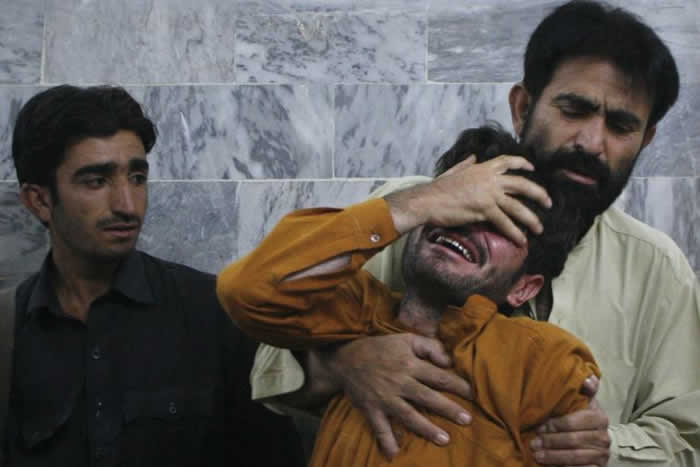 Why Pakistan is failing against terrorism?

Pakistan has been fighting against terrorism since 9/11, 2001, when the United States of America was attacked by Al-Qaeda. Though its decision was hesitant and because of American pressure, it fought against terrorists and is still fighting.

In its combat against terrorism, Pakistan has lost more than 70,000 lives, and still continuing, but it is nowhere near ending terrorism.

Pakistan’s inability or unwillingness is evident from the time it has taken in formulating its (first) National Action Plan, (NAP), to eradicate terrorism, which is more than 14 years. Before the formulation of such a plan, many debated “who is a terrorist”, “who is a mujahid”, “who should be called a martyr and who should not be”, from TV talk shows to all fields of life. And even after a year of NAP, such debates have not lost their heat. In his speech, before waging the “war on terror”, President Bush told his citizen that, Why the United States of America was attacked, who carried this attack, and what the U.S. is going to do? Unlike the United States, no one tried to give a clear (even false) explanation of “why Pakistan is under attack’, and who is carrying these attacks. Perhaps there was no explanation at all. So, what happened, after every terrorist attack there came different distorted explanations, which painted an elusive and ambiguous picture, just like an abstract painting, to which anyone can attach any meanings. This picture was more or less like this; “no Muslim can kill Muslims so this must be done by non-Muslims”. “India doesn’t want peace in Pakistan so it must be done by RAW”, “America is behind it”. “Israel has done this hideous thing”. So on and so forth. This indicates an extremist mindset which is an outcome of decades of radicalization and Islamization of political issues in Pakistan.

Though it has started from 1949’s Objectives Resolution but till General Zia’s era religion has a relatively lesser influence on politics. In General Zia’s time, everything was Islamized to fight against the Soviets, which gave enormous power to religious parties and groups. From 1979 to 1989, these ten years, when a holy war was fought in Afghanistan, all most all of Pakistan was militarized and radicalized. In 1989, Soviet’s defeat triumphed extremism. In the same year, the insurgency in Kashmir was affected by the overflow of extremism. Jammu Kashmir Liberation Front’s (JKLF) militant struggle for the right of self-determination and independence got Islamized and soon became a Jehad for the incorporation of Kashmir into Pakistan. Islamization of the Kashmir dispute strengthened the religious parties and weaken democratic institutions. It paved a way for military coups and overthrown the elected governments. Religious parties supported military regimes and, military regimes in return protected their interests. Extremism created a war loving mindset which was not favorable for political leaders but military dictators. In his efforts to solve the Kashmir dispute, General Musharraf had gone one or two steps away. Retreating from the decade-old stance on Kashmir was his one the biggest mistakes, which led to the start of terrorist attacks inside Pakistan and after that there frequency and intensity increased with every passing day.

Pakistan’s efforts in combating terrorism are linked with its people’s mindset. Terrorism is an ideology and needs to be replaced by a non-terrorist ideology. It is a narrative which needs to be challenged with a counter-narrative. Pakistan has conducted a handful military operations in its Tribal areas, which are being considered successful but it has failed on the ideological front. Failure in preventing a terrorist attack is not just Pakistan’s inability but failure in fulfilling what is needed to be fulfilled after an attack is its specification. It has failed in bringing madrasa and syllabus reforms. It has failed in implementing NAP’s major portion. And more importantly, it has failed in countering the narrative of terrorists which has given them an advantage of recruiting more and more people for their ranks. Militancy is not a solution to any of Pakistan problems and certainly not to the Kashmir dispute. Pakistan needs to de-Islamized the Kashmir dispute, which will strengthen its democratic institutions and will reduce support for religious and militant groups and leaders. This could reduce the number of extremist minds in the country. When there will be considerable voices against homegrown terrorists, extremism will then be challenged on the ideological level. And only then a counter-narrative can be successful.