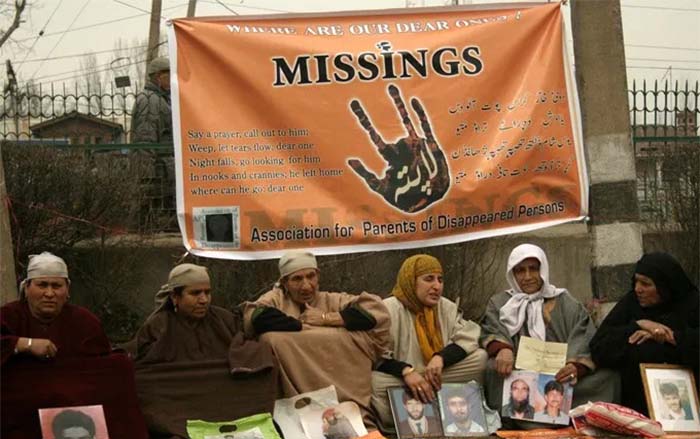 Latin American Federation of Association of Relatives of the Disappeared in 1981, initiated to commemorate their loved ones who gone missing. On increasing numbers of missing persons across the world, UN General Assembly expressed deep concern by its resolution 65/209 on 21 december 2010 & adopted International Convention for the protection of all persons from enforce disappearance, declared 30 August to be observed as International Day of Disappeared.

The Article 1 of the convention “no one shall be subjected to enforced disappearance & no exceptional circumstances whatsoever whether war or threat of war, political instability or public emergency may be invoked as justification”, since three decades Families of Missing persons of Kashmir wandering here & there who lost their love ones by indian forces & state sponsored militia Tha Ikhwanis.

On human rights day under the banner of Association of Parents of Disappeared Persons (APDP), a group of villagers submitted 132 cases from a single area of Banihal village to J&K state human rights commission, how worst situation is there that 132 cases of missing persons in one area of one district, the ADPD & Jammu Kashmir Coalition of Civil Society claims more then 8000 cases of Missing Persons, A report published in 2009 by International People’s Tribunal for Human Rights & Justice in Kashmir that documented 2700 unmarked, unknown & mass graves which contain thousands of bullet riddled bodies across 55 villages of northern Kashmir, it is the buried evidence of indian forces’ crime against humanity, which is endorsed by State Human Rights Commission in 2011, to which Indian Gov’t refused to forensic examination of bodies.

According to Article 5 of The Convention “the widespread & systematic practice of enforced disappearance of persons constitutes a crime against humanity”, in view of this in Kashmir there is open & widespread violation of international norms & standards by Indian Gov’t, Black laws like Public Safety Act which allows Indian forces to detain anyone without any offence or charge & can keep in custody for two years without any trial, another black law Armed Forces Special Power Act AFPSA gives impunity to forces for all kind of offence therefore indian forces involved in massive offences includes enforce disappearance of persons, brutal torture, molestation of women & girls, extra judicial killings.

The international human rights orgnisation widely criticized & demanded to revoke such black laws but Indian Gov’t never respond positively & it is widely heard that indian army claims if they would not allowed to operate without impunity then Kashmir will go out of hand, what a pity on humanity is this that they ask for lisence to kill or freedom of offence. Fact Finding Committee of Social Activists recently back from Kashmir who were not allowed to show video & photographs by Delhi Press Club, Kavita Karishnan & Maimoona both activists shown deep concern over worst situation of Kashmir on ground, more then 4000 lifted by security forcy under PSA, even young children were detained & kept them into unknown place.

Indeed, it is really deep concerned that growing number of missing persons in Kashmir by impunitized indian army & state sponsored militia ikhwanis. Right to life is everyone’s right, right to security, right to truth to families of missing persons, prohibtion of torture, prohibtion of extra judicial killings, right to recognize before law & right of freedom & liberty are guaranteed by International Covenant on Civil & Political Rights (ICCPR) to which india is signatory. Also the Rome statute of International Criminal Court described enforced disappearance is crime against humanity. On widespread human rights abuses on indian side, it is the core responsibility of civilized nations to barred India’s crime against humanity instead of appeal, to which she never pay heed.

Pakistan Stands in Solidarity with Kashmiris