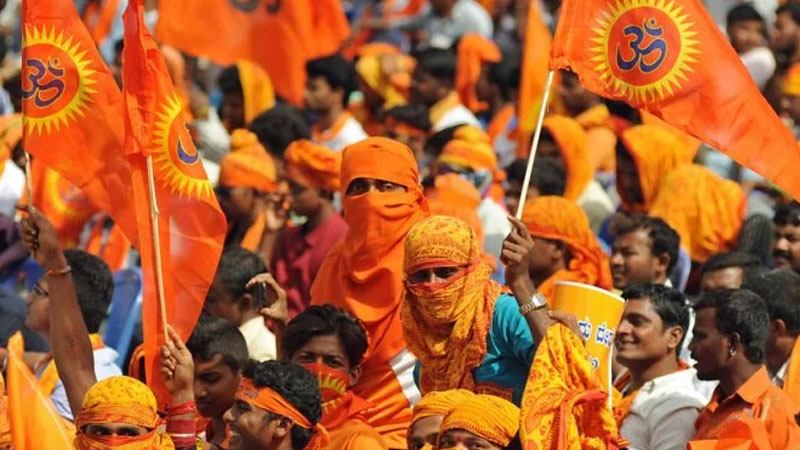 The ideology of hindutva was so ambiguous & doubtful that the ideologue himself was not confident & sitisfied with this so it was at first published without the name of author. Hindutva ideology was borrowed from the European Fascism to transform other then hindus as enemy as described by Dr Lawrence Brit that there is no tolerance for other relgions & nations under fascism, to attaining power fascist mindset use religion, superiority & patriotism as main tool alongwith controlling of media, protection of corporate powers, fraudulent elections, control of institutions & fear is used as a motivational tool by fascists.

Hindutva Leaders even its ideologue repeatedly expressed admiration for authoritarian leaders such as Missoulini, Hitler & for their hegemonic model. This influence enters into mainstream of India in the shape of BJP, the current Prime Minister N Modi started his political career as RSS activist, when he was Chief Minister of Gujrat, He managed a muslim genocide in 2002 that took thousands of lives of Muslims. Hindutva ideology of Hindu supermacy, its hegemonic design & zero tolerance for other relgions specially Islam, Christianity is not covered from anyone. RSS is so extreme in its ideology that they did nt even tolerate Mr Gandhi who was killed by RSS activist N Godsay accusing that Gandhi is responsible for the division of Holy India.

After the assassination of Gandhi, The Congress circulated report at the time of first ban on RSS, it states that RSS has been founded in Nagpur, a purely Maharashtrian Brahmin organisation, through this platform Maharashtrian Brahmins have been dreaming of Peshwa Raj after withdrawal of British, their flag is bhagwa flag of Peshwaas (last ruler of Maharashter, was defeated by British), there is no constitution of organization & practices secret cum violent methods to promote their fascist ideas. Hindutva have stern enmity for Pakistan & Islam into their circle, several times they involved in Muslim Genocide however it is Jammu Massacre of over 2 lacs Muslims, Jamshedpur massacre, AhmedAbad or others, It was RSS who involved in igniting revolt in East Pakistan as Modi Confessed himself of part of Mukti-Bahini at occasion of visit to Bangladesh, while the situation of East Pakistan was so much worst.

The Subramaniam stated to Gov’t of India for aggression against Pakistan & said “It is the chance of centuries”, resulting 1971 Indo-Pak war took place led to separation of East Pakistan as Bangladesh. Later they have started to counter replacement of democratic, secular, pluralistic set up of India, By right Now Hindutva ideology have existed throughout its main bodies, after coming into power of Hindutva mindset BJP, they have started to act upon their fascist ideology.

In this regard they lynched many Muslims to spread fear, they abrogated article 370 & dreaming to dominant Kashmir by driving out Muslims, in Aasam they made millions of Muslims stateless, Amit Anilchandra Shah announced complete ethnically cleansing of Muslims & Christians from India, state sponsored torture & harassment is on its peak, inhumane treatment with Muslims, Dalits, Sikhs, Christians & other minorities is now state policy, media is propagating ideology of hindutva, Modi’s recent speech in which he stated that Pakistan was the part of India & they will re-unite it, Hindutva Midset believed that they will dominant on the footstep of German Nazi & Missolini but they are forgetting that Germany & Italy had one nation one religion so fascism prevailed their whereas India is poly relgio-ethnic region, that’s why this model will become volcano for them, in result of widespread inhumane treatment there is massive hatred & revolt is being initiating, so for Pakistan this is “Chance of Centuries” to back East Pakistan revolt.