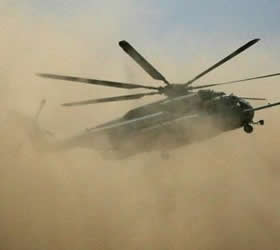 US’ Apache helicopter gunships have carried out at least three airstrikes inside Pakistan in as many days, killing on the first day more than 30 people ISAF claimed were insurgents, who had attacked an Afghan security outpost. According to ISAF, the first strike took place on Saturday after Pakistan-based insurgents attacked an Afghan security post in Khost province, across the border from North Waziristan, and the helicopters crossed into Pakistan to “engage the insurgents.”

The second one occurred, goes the account, when the helicopters had gone into the Afghan border area, but were attacked by insurgents from the Pakistani side. They returned fire killing “several militants.” A report quoting Pakistani intelligence officials says two Nato helicopter carried out a third strike inside Pakistani territory in the Kurram Agency on Monday morning, killing five militants and wounding nine others. Strangely, the government as well as the military spokesman in Islamabad has remained silent on the subject.

The helicopter incursions point to a dangerous escalation. Public sentiments are already highly inflamed over relentless US drone strikes that have claimed the lives of hundreds of innocent Pakistanis. Incidents involving manned aerial strikes can only add fuel to the fire. They may also lead to unintended consequences like it happened in 2008 when 11 Pakistani soldiers manning a post in Mohmand were killed by ‘accidental’ US missile. The US military had maintained that its men were withdrawing from a disputed mountaintop position when they came under insurgent attack, and assault helicopters called for help fired missiles killing 8 militants. One missile, it said, hit a Pakistani post. The incident, of course, had infuriated the Army high command which reacted angrily saying it was “an unprovoked and cowardly” attack that threatened to undermine the two countries’ co-operation in the war against terror.

An equally, if not more important, aspect of the issue pertains to the question of national sovereignty. At the time of the Mohmand incident, Prime Minister Yousuf Raza Gilani had declared in the National Assembly that the government would defend “national sovereignty, integrity, and self respect, and will not allow our soil [to be attacked].” Right now the nation’s attention is focused on the political scene; soon it will return to the US helicopter incursions and question will be asked about violations of sovereignty.

Notably, Isaf spokesman, US captain Ryan Donald, told journalists “Isaf maintains the right to self-defence, and that’s why they [the helicopters] crossed the Pakistani border.” In other words, the US thinks its military aircraft can enter this country’s airspace in hot pursuit. The ‘hot pursuit’ argument can set a destructive precedent in this conflict-ridden region. It is imperative therefore that the US refrains from any further hot pursuit. It must effectively reactivate the tripartite co-operation mechanism under which the Nato forces, Afghan Army and Pakistan Army are supposed to share intelligence and act in co-ordination to deal with the insurgents’ activities. – brecorder