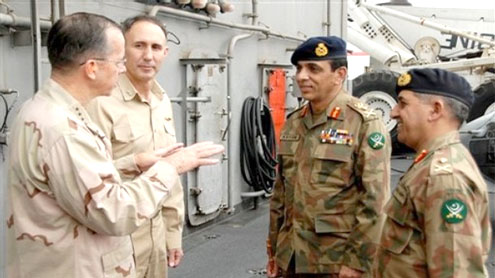 AMIDST the Pak-US diplomatic standoff, the relations between the two spy agencies ISI and CIA have apparently soured. According to the New York Times, ISI head Lieutenant General Ahmad Shuja Pasha and CIA Director Leon Panetta have had a long and serious telephonic conversation, in which Pakistan’s chief spy agency has demanded an accounting by the Central Intelligence Agency of all its contractors working in Pakistan, a fallout from the arrest last month of an American involved in surveillance of militant groups. Angered that the American, Raymond A. Davis, worked as a contractor in Pakistan on covert C.I.A. operations without the knowledge of the Pakistanis, the spy agency estimated that there were “scores” more such contractors “working behind our backs.” Meanwhile, another US national has been held in Pakistan for his alleged illegal stay in the country following expiry of his visa. Aaron Mark DeHaven was arrested by security agencies in Peshawar and booked under the Foreigners Act on charges of illegally residing in Pakistan after his visa expired in October last year. Reportedly he has converted to Islam and has married a local woman. He was also reported to be in the business of hiring residences for fellow Americans in Peshawar. A Pakistani court has remanded him to judicial custody for 14 days. DeHaven had come to Pakistan on a business visa and made some investments in the country, officials said. He had no connection with any NGO and was running his own business, they said, adding he did not possess valid travel documents. Little was known about him except that his firm was staffed by retired U.S. military personnel who boast direct experience in the ‘’global war on terror.”The CIA is reportedly extremely annoyed at the continued detention of CIA operative Raymond Davis over the murder of two Pakistanis on the streets of Lahore, insisting that Davis deserves “diplomatic immunity” for the killings. Now, according to those reports, the CIA is mulling retaliatory targeting of Pakistani diplomats across the world, in the hopes of putting them in a similar circumstance as a way of spiting the Pakistani government or perhaps shaming them into releasing Davis.

Pakistani prosecutors accuse Davis of excessive force, saying he fired 10 shots and got out of his car to shoot one man twice in the back as he fled. The man’s body was found 30 feet from his motorbike. “It went way beyond what we define as self-defence. It was not commensurate with the threat,” a senior police official involved in the case told the media. The U.S. embassy and the State Department have accused Pakistan of breaching international conventions by remanding in custody an official with diplomatic status. Meanwhile, to check the downward slide in relations and falling into the abyss of the cold war era “spy vs. spy” syndrome, in which CIA and KGB secret agents targeted each other, the top American and Pakistani military leaders, including the chairman of the Joint Chiefs of Staff, Admiral Mike Mullen, and the Chief of Army Staff of the Pakistani Army, General Ashfaq Parvez Kayani, met last week in Oman, where the Davis case was discussed. Since both Pakistan and the US are pursuing common goals of eradicating terrorism, it would be prudent to sink their differences, reduce the trust deficit and for CIA to cooperate with ISI – Dailymailnews