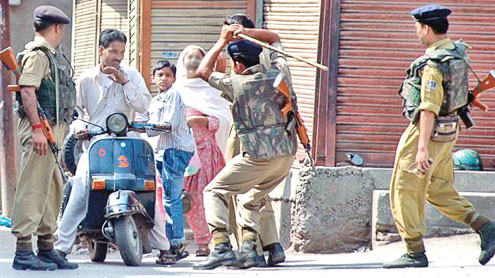 THE illegal Indian occupation of Kashmir continues unabated. This fact has been corroborated by independent observers too. A Delhi-based civil rights group “Jan Hastakshep’’ (people’s intervention), which concluded a four-day “fact-finding mission” of the Valley recently, has termed Kashmir as an “occupied territory” and asked the government to respond to Kashmiris demand for “Azadi” (Freedom), and grant them the right to self determination. The group visited Srinagar, Baramulla, Kupwara, Shopian apart from several villages and met Hurriyat leaders including Syed Ali Geelani, Mirwaiz Umer Farooq and JKLF chief Yasin Malik. Convener of the seven-member group V. K. Ohri, a Supreme Court lawyer, said at a press conference in Srinagar that its report will be sent to the Centre and civil society groups across India. He added, “We’ll also form pressure groups to create awareness about the Kashmir issue”. He said that the team also met the Kashmiri pundit community who “echoed the majority’s demand for Azadi” and “maintained that there was no threat to them” from fellow Kashmiri Muslims, Amit Badri, member and Professor at Nehru University, Delhi, said that the problem in Kashmir started with the “occupation” by Indian Army. He added that the lack of accountability which had started with the military has now penetrated down to the police and the paramilitary forces. Demanding the pullout of Army from the civilian areas, another member, Dr. N Bhattacharya said that the Army had developed vested interests in Kashmir, and encroaches upon the land wherever they find an opportunity. He added that New Delhi has deployed 8 lakh troopers in Kashmir after projecting a threat from Pakistan which is portrayed as an “enemy country”. Former ambassador to Portugal, Madhu Bahaduri said that India had denied justice to Kashmiris even though it gained independence from the British rule. She said the people of Kashmir have lost faith in the judicial system and there is a “deep sense of injustice”. Referring to the long agitation last year, she added, “The government reacted with militancy to non-violent protests, killing innocent youth”.Meanwhile, Chief Minister Omar Abdullah yesterday announced the removal of 12 more bunkers from Srinagar as part of an exercise launched last year to reduce the footprints of the security forces in the Valley. Earlier, 27 such bunkers were removed by the government in two phases. A decision to undertake similar action in other towns is expected to be taken shortly according to an official spokesperson. The Chief Minister reiterated the government’s invitation to pro-freedom leaders to initiate talks with the Centre’s interlocutors on Kashmir who have visited the state four times. The Hurriyat leaders have spurned such offers consistently.

In another development, a 12-page calendar, published by Syed Ali Geelani’s party Tehreek-e-Hurriyat is in much demand in loK, according to the Indian media. The “novel calendar” contains date-wise details of major killings carried out by security forces over the past six decades, along with names of the victims, the genesis of the Kashmir dispute and an appeal to people to support the “Quit Kashmir” movement launched in last June by the Geelani-led faction of APHC. It maintains that Kashmir is a “disputed territory” and should get freedom from the “forcible occupation of India”. It highlights the UN resolutions on Kashmir, the Shopian rape and killings of two women, and the fake encounter killings of three young men last year. Despite the token steps (such as the removal of security bunkers) by the state and Union governments to control the situation, the Valley continues to remain tense. Sporadic protests are also likely to continue. The findings of the Jan Hastakshep mission are an important and impartial observation, which merit publicity. India needs to be pressurized by peaceful means to take cognizance of its harsh and oppressive illegal rule in Kashmir and be asked to abide by the UN resolutions on the subject to ensure the Kashmiris get their right of self determination – Dailytimes