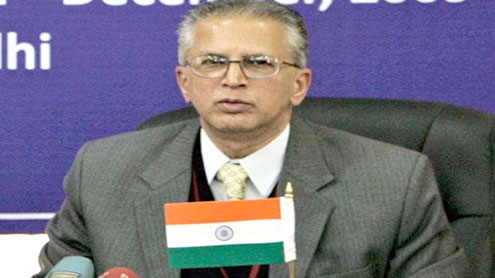 INDIAN Home Secretary, G. K. Pillai has admitted that saffron terror was a cause of great concern but in the next breath, he claims that the rise in security problems is partly due to the “neighbourhood”. Firstly, Mr. Pillai must be commended that he has finally admitted that extremist Hindus are running amok in India but at the same instance, he depicts his confused state of mind and warped thinking when he blames the “neighbourhood”. To start with does he mean the extremist Hindus in India’s neighbourhood perhaps alluding to Nepal and Bhutan, the only Hindu Kingdoms in India’s neighbourhood are to blame or is he implying that the Muslims of Pakistan, Bangladesh and Maldives are creating problems for India and he mistakenly observing them through his saffron tinted glasses. Earlier, readers may recall that upcoming Congress leader and a great grandson of Pundit Jawaharlal Nehru, Rahul Gandhi had admitted that “Hindutva” brigades were creating havoc in India.The Daily Mail has been shedding light on the rising elements of extremist Hindus, who have permeated not only in the Indian society but its armed forces, and are spelling trouble both for India as well as its “neighbourhood”. The confessions of the Hindu Swami in a sworn statement before an Indian magistrate shed light on the extent of damage these Hindutva brigades are causing. The genocide of Muslims in Gujarat, Maharashtra and Kashmir has disturbed human rights observers around the world. Thousands of Muslims have been torched alive, their women raped and their houses burnt after being looted has caused serious damage to India’s image. The more disturbing aspect is the factor that extremist organizations like “Abhinav Bharat” have sworn revenge from the minorities of Muslims and Christians and have recruited Indian armed forces personnel to execute their macabre plans of ethnic cleansing of the Indian society. The Samjhota Express carnage resulted in the massacre of 59 Pakistanis and now it has come to light that Indian Army personnel were actively involved in this heinous plot.

Even the Mumbai attacks appear to have been orchestrated by these extremist Hindu groups, to eliminate Indian Anti Terrorist Squad commanders like Haimant Karkare, who were on the trail of such Indian army personnel as well as put the blame squarely on Pakistan and bring it on the radar screen of world terrorist watchers. Such extremist Hindus have also been slaying Christians by the hundreds in Orissa and whenever they have had the opportunity. Another community they have successfully targeted is the Sikhs. The attack on the Sikh’s holiest of shrines The Golden Temple of Amritsar resulted in the death of thousands of Sikhs. The rioting by enraged Hindu rioters after the assassination of Indira Gandhi left thousands of Sikhs slaughtered in its wake. The Saffron bandits are not only targeting Muslims, Christians and Sikhs but also low caste Hindus like Dalits. The downtrodden scheduled caste has been the target of Hindu rage and anger only because they are considered “untouchables” and unclean by upper class Hindu Brahmins.It is heartening that Mr. Pillai has realized where the shoe pinches. Now he has his work cut out in eliminating these saffron bands of terror along with weeding out the Indian armed forces and its spy agency RAW, who are running their own agenda of hate and terror campaigns – Dailymailnews

Women, but not weak