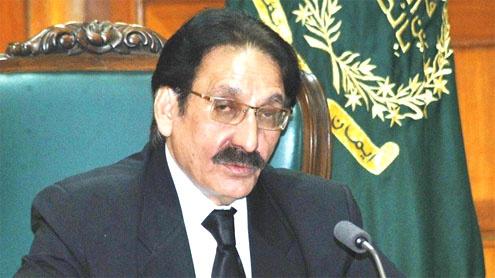 While Balochistan burns, the authorities concerned with setting things right are busy fiddling with their usual pastime of political wrangling and compromises. Their shocking indifference smacks of Nero’s sense of the fast approaching disaster. As Chief Justice Iftikhar Chaudhry pointed out at Tuesday’s hearing of the case of missing persons, there should be no compulsion to handle the situation in an “out-of-the-box” manner when constitutional means are available. Discovery of the dead bodies of those allegedly picked up by secret agencies; kidnappings of notables; destruction of vital installations; and exodus of the peace-loving population from the province are a routine affair.

They are some manifestations of the feeling of injustice the Baloch constantly live with.The Balochistan package, so proudly announced by the present government, appears to have been shelved and with that lies buried the hope for the mitigation of their sense of wrong. Calls from the media and worried patriotic Pakistanis to implement the package have gone unheard. Now that the provincial government has taken the unusual step to go public with the request to the federal authorities to put the package into effect should one hope that the powers that be would wake up?

Reinforcing the Balochistan government’s plea are facts, cited by it, like: no industrial base in the province to provide jobs to the local population, except for the meagre livestock farming, small-scale agriculture and some openings in government service. As the nation awaits the federal authorities to act, the cycle of suppression and the violent ways of the people’s response continues unabated, putting at stake the very integrity of the country. According to official records, last year witnessed 244 falling victim to target killing, 56 gone missing, 59 kidnapped for ransom and 123 bodies found dumped on the streets – alarming statistics of lawlessness in the country’s largest federating unit that is rich in mineral wealth and almost every kind of natural resources. It is only once in a while that a kidnapped person is recovered like the two judges who were kidnapped on February 27 – Nation