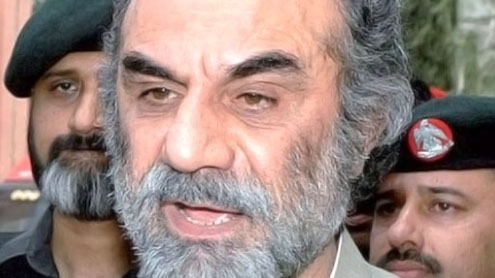 Hardly a day goes by without some act of violence disturbing the peace of Balochistan. Thursday was no exception when six men including four soldiers of the FC died in a series of bomb attacks in various parts of the province.In one of the attacks, the explosive device was planted in a vehicle parked along a roadside in the Sariab area and was detonated through remote control when a convoy of FC troops was passing by. That the weapons used were sophisticated only reaffirms the charge that a foreign hand is providing assistance to plunge the province into chaos. One can well imagine the sense of insecurity among the general public when even the army personnel are not safe. However, the pity is that while foreign funded powerful forces are working day and night to spread violence, the government response is listlessness.

The solution is not to suppress the Baloch but to redress their problems and take effective measures against foreign elements that have been delivering a severe blow to the stability and peace of the country. Among others, a major problem that allows the miscreants to attack, easily go into hiding and evade arrest is that of absence of a centralised leadership and administration. There is of course provincial government but Chief Minister AslamRaisani himself makes no bones about the fact that he is a lame duck and that real power resides in the security agencies. At the same time it is argued that there is FC and provincial police, which wield true power. But, it would be pointless to lay the finger of accusation in any particular direction.The onus is on the federal government to coordinate and synergise the operations of various law enforcement agencies as well as the provincial government to put an end to the machinations of our enemies. These efforts, however, will have little chance of success unless and until the Aaghe-e-Haqooq-e-Balochistan package is implemented in letter and in spirit