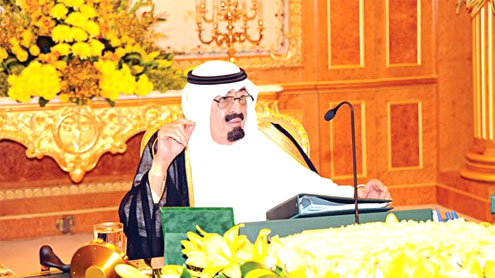 Saudi Arabia’s security forces arrested several people who were demonstrating at the Interior Ministry in Riyadh on Sunday. In recent weeks, small protests have broken out in different parts of the Kingdom to protest against the monarchy and its heavy-handed rule. Saudi King Abdullah had made a short speech on television on Friday and promised to bring about reforms to placate his nation. He announced billions of dollars in handouts; the reform package includes a minimum wage of 3,000 riyals ($ 800) a month for government employees. The king also announced 500,000 new housing units to which around $ 67 billion would be allocated besides other social benefits such as offering employees two months extra salary, higher unemployment payments and better healthcare.

On the one hand, the Saudi monarch offered all these ‘perks’ to his people to bolster their morale and quell the demonstrations, while on the other he also warned them of dire consequences in case of ‘disobedience’. King Abdullah warned the Saudi people that his security forces would hit whoever undermines the Royal Kingdom’s security and stability. Addressing the Saudi security forces, he said: “You are the hitting hand against whoever considers undermining the nation’s security and stability.” This is a classic case of adopting a carrot and stick policy. The Saudi monarch sweetened the carrot enough to let the people allow him to continue with his despotic monarchy and its system while threatening the stick to dissuade them from any protests or uprising. The recent revolt in Arab countries has sent warning signals to all Arab despots, especially the House of Saud.

Saudi Arabia’s monarchy has the reputation of being one of the strictest in the world. Not only are the laws in Saudi Arabia too rigid, there is no regard for human rights. Now that Tunisia and Egypt have overthrown dictators and there are uprisings in Libya, Yemen, Bahrain and other Arab countries, the Saudi royal family is trying to take matters into their own hands and put a leash on their people. But the Saudi monarch is forgetting that when suppression and oppression become unbearable, sooner or later a people’s movement emerges. Even brute force cannot make them bow down. The days ahead may prove tough for the House of Saud – Dailytimes