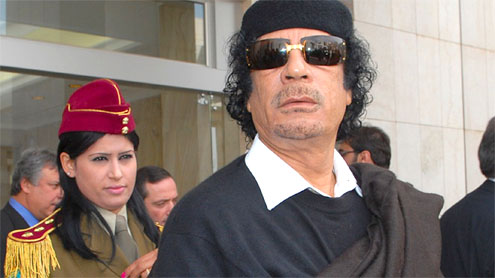 While one would not hold any brief for the Libyan ruler Col Gaddafi, mercilessly suppressing the expression of democratic aspirations of the people of his country, there is no way one could justify the ruthless bombing campaign that the US and its lackey European countries, Britain and France, have launched against it. They have knocked out its air defence system and blown up some oil storages.

Had they waited and allowed the cease-fire announced by Col Gaddafi to take hold, there might not have been any need for an outside intervention. Even in case peace had not returned, the best course was to go through the diplomatic process of bringing around Tripoli to ensure the safety of civilian life and property. The US-led aggression is, therefore, uncalled for, indeed reprehensible, the more so because under the pretext of preventing the human rights violations, the West is trying to safeguard its own strategic interests: to ensure that Israel remains the most powerful and predominant country in the Middle East. On that score, any unrest that threatens the hold of the friendly and manageable Arab rulers of the region over their nations is a cause for great concern to the West. An added reason for its worry is that as these countries are in possession of the resource of oil, they have the potential of joining the ranks of the advanced world and, thus, having the ability to turn the table on the Jewish entity – Nation