Another attack on our traditions 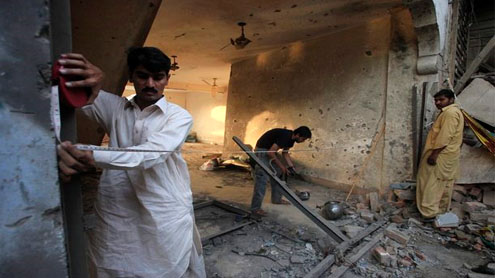 The ugly face of religious intolerance showed its true colours once again on Sunday in a small town near Dera Ghazi Khan. The shrine of the 13th century Sufi Saint Syed Ahmad Sakhi Sarwar was hosting its 942nd Urs-cum-spring festivities when two suicide bombers detonated themselves outside the shrine. Hundreds of devotees were gathered at the shrine to pay their respects when the first suicide blast took place outside the gate. Pandemonium ensued and some 20 minutes later another bomber ripped through the remaining human chaos to cause a maximum amount of damage. It is now being reported that two more bombers were set to explode themselves to cause even more havoc but they were arrested before a further bloodbath could ensue. The total death toll has reached a devastating 50 while more than 100 people have been injured, many of them critically. The Tehreek-e-Taliban Pakistan (TTP) have claimed responsibility, which comes as no surprise as almost all the terror attacks carried out in Pakistan can be attributed to them.

Once again, our society has suffered a terror so deadly it does not recognise humanity nor does it refrain from targeting innocent men, women and children to spread mayhem and tragedy. This attack is the sixth major attack on shrines since 2007 in an attempt to frighten away the followers of the overriding faith that exists in the subcontinent — that of Sufi mysticism and participation in the culture of the shrine. It is this culture that is considered shirk by the fundamentalist militants who preach a radical and bloody streak of Wahabi Islam. Previously this was thought of as a battle between the Wahabi militants who have infiltrated the region with their imported brand of jihadi Islam and the Barelvi sect that goes to shrines and believes in saints. However, the culture and traditions of Sufi shrines are not confined to one or the other sect. As a matter of fact, throughout the Subcontinent, the inclusive and tolerant message of the Sufi saints is what helped the spread of Islam and even now attracts all sects, even non-Muslims to its embrace. This culture and these traditions represent the greatest obstacle to the extremists’ imposition by force of their narrow, literalist and purist interpretations of religion. Hence the campaign of bombing shrines that has afflicted Pakistan since the jihadis decided four years ago to turn on their mentors and Pakistani society generally.

Attacking the most sacred sites in the subcontinent — shrines — the militants are trying to first obliterate all remnants of Sufi Islam (the original message of the faith in the subcontinent) after which they wish to spread a stringent interpretation of a medieval brand of ‘Islam’, more in tune with Pashtun tribal traditions wedded to a rigid jihadi doctrine. However, this attack and the others like it betray a certain desperation on the part of the militants. When taking on the majority, there is no way the militants will win. Such attacks, while causing wide-scale devastation, will only serve to anger the many and turn almost all against this murderous version of a religion the militant minority will never get the opportunity to impose.It has become even more pertinent now to nip this warped religious mindset in the bud. Better performance by our intelligence establishment and security apparatus is more necessary than ever. One of the arrested bombers is reportedly an Afghan refugee, relaying that it is vital to keep tabs on the real ‘foreign elements’. For the citizens, public awareness campaigns must be promoted to educate the people on suspicious activities and people, especially during sensitive times where religious activities and congregations take place.This is our country and this is our culture that the militants are trying to destroy. It is time to take a determined stand to wipe out this scourge that rests on the hate-fuelled fabric of intolerance and brutality. – Dailytimes