More casualties in this war 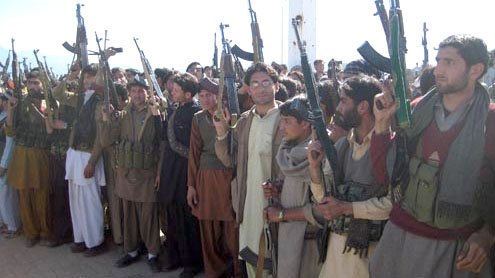 The extremists have accelerated their nefarious designs against the state. In the past seven days, almost as many attacks have left the country reeling from destruction and loss of lives. The latest attack occurred in Lower Dir on Monday when a suicide bomber detonated himself near a bus stand, killing some eight people. Apparently, the target of the bombing was Muhammad Akbar, the leader of an anti-Taliban lashkar (militia). This was not the first attempt on the man’s life. In another incident, the body of Dushmankhel tribal chief, Sardar Amanuddin Mehsud was found tortured to death in Wana, South Waziristan. Mehsud had been missing for two months but now he becomes yet another casualty in this bloody war against moderate voices.

The militants are making sure that there is no space left in Pakistan for men and women of enlightened beliefs and moderate standing. They are obliterating any remnants of sanity so that only their ilk remains. Anti-Taliban lashkars exist because the state has failed to protect the citizens from the extremists’ wrath. They exist to safeguard the beliefs, principles, views and values of an entire people who do not follow the rigid interpretations of the extremists’ theology. It is because of this very reason that they are being targeted so ruthlessly. The state must offer protection to those who are doing the job of guarding Pakistan.

The news that three suspects — thought to be connected to the Sakhi Sarwar shrine blast in Dera Ghazi Khan — have been arrested from Chakri by the intelligence agencies is encouraging. It is of paramount importance that greater efficiency is introduced into our intelligence agencies and security apparatus to pre-empt any threats and strikes and to arrest anyone connected to terror attacks. Pakistan has become fair game for the extremists, where lawlessness and anarchy are being spread to their advantage. Without our intelligence agencies sitting up and taking notice of the fraying of the writ of the state and the murder of moderate elements, Pakistan will see many more such attacks on the citizenry. It is now time to strategically and precisely target all terrorists as they are increasing their war on the state and have established links between their networks for the purpose. Our establishment must sever all remaining links and give up any lingering support for these groups in order to uproot them all. – Dailytimes