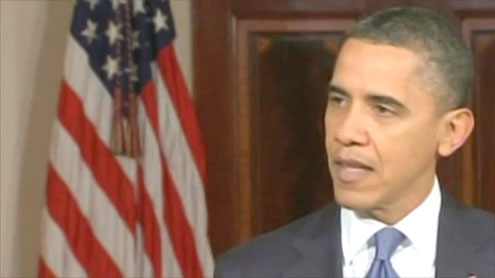 America’s credit crunch is of its own making and is rooted in its conflicts.Watching the continuing dance on the brink in Washington from the edge of their seats, people around the world increasingly wonder if this is really America, the most powerful economy and nation on the planet.How reckless and callous the politicians in the land of the free can be? While they count their brownie points and shamelessly pander to their forever-frothing-at-the-mouth gallery, the US economy teeters on the brink and the very future of the country has been put on the line.

The world wouldn’t care two hoots if this had happened in any other country. But America isn’t any other country. It not just happens to be the world’s largest economy and its driving engine, it also owns the mighty dollar, the global reserve currency or the money in which the world does its business. This is why the continuing standoff between President Barack Obama and the Republican-dominated Congress isn’t merely a cause of domestic unhappiness.

Uncle Sam’s headache has become the heartache of the rest of the world.How did America end up here? Frankly, this is a manufactured crisis by the increasingly irresponsible Republican politicians. They have taken their rhetoric against “big government” and “unnecessary taxes” by the so-called liberals of the left too far. The debt ceiling or the limit of America’s borrowings should have been quietly raised, as it has routinely been done by Obama’s numerous predecessors, including those from the GOP.

Why even Ronald Reagan, the poster boy of the Republicans and the US right, was no exception, having had to raise it several times during his eight years in office.Instead, using their brute majority in the Congress and House of Representatives, the Republicans led by Speaker John Boehner have shot down the government proposal to raise the borrowing limit sparking this orchestrated crisis. On Saturday, the Republican-controlled House rejected the proposal introduced by Senate Democratic leader Harry Reid 246-173, even before the Senate had voted on it.The trouble is, this orchestrated crisis has now transformed into a real one with potentially catastrophic consequences for the world economy at a time when it is trying hard to recover from the effects of the 2008-09 recession.

If this standoff doesn’t end by tonight and a deal is not in place by morning tomorrow (Tuesday) before the crucial vote on raising the credit ceiling, all hell will break loose. The US will default on its skyrocketing debt and the greenback will lose its status as the global currency, setting off catastrophic cascading effects across the world, leading to a meltdown perhaps worse than the recent recession or the Great Crash of 1929. By then it would be perhaps too late to blame or punish the Republicans for their stupidity and dangerous antics.

It’s not just this crisis that is of the Republican making. If America has ended up with this backbreaking debt, it’s chiefly because of the Republican wars hoisted on the Muslim world. In a way, there may be some sort of poetic justice at work here. America is paying for its unjust and orchestrated wars. As if the mess in Afghanistan and Iraq, where the US is burning billions in taxpayers’ dollars on a daily basis, wasn’t enough, it’s expanding its disastrous involvement and drone attacks to new areas, from Pakistan to Yemen to Somalia. America is reaping what it has sowed over the years. – Arabnews