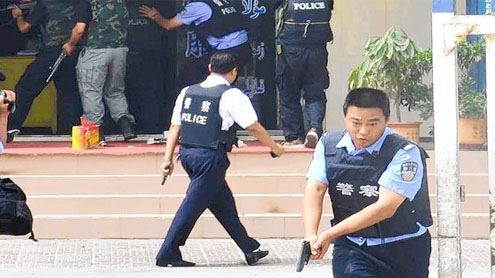 Our friend for all seasons — China — seems to have a few gripes with us, and not without reason. Once again violence has erupted in China’s Xinjiang province, which shares borders with Kyrgyzstan and Uzbekistan, and Beijing is pointing fingers at Muslim militants it claims received training in Pakistan’s tribal regions.

The last weekend saw a heightened cycle of violence in the region with some 19 people killed, first when militants rammed a truck into a crowd of people and later when they attacked a restaurant thronged with patrons in the city of Kashgar. Although ethnic strife is nothing new in this tense area, it is China’s accusations directed towards Pakistan that ought to merit concern.

Xinjiang has been a source of ethnic unrest because it has over the years seen a mass influx of Han Chinese into the Muslim Turkic-speaking Ulghurs’ province. This has caused the emergence of a violent separatist struggle against what is seen as Beijing’s high-handedness. The Ulghurs are known for their brutal acts of violence that include slicing Han throats and other bloody acts. China has, in the past, asked Pakistan to stay watchful for any signs of terror training for those fighting the Xinjiang war.

Now China seems to be doing away with the niceties and has explicitly said that members of the East Turkestan Islamic Movement (ETIM) have learned how to make explosives in camps located in Pakistan’s tribal regions. It seems the jihadi training camps made here during the Afghan jihad are coming to haunt us from many different angles now.

Although we cannot do or say much about the sentiments and fury that have ignited the separatist movement in Xinjiang — we suffer from many similar demons in Balochistan — it is good to see that the Pakistani government has vowed to do all it can to cooperate with China. This must be welcomed but it is hoped we extend our full support to our truest friend unlike the double games we have played with the US — another ally. – Dailytimes

Presentation given to the Prime Minister on Air Blue Aircraft Crash

Presentation given to the Prime Minister on Air Blue Aircraft Crash