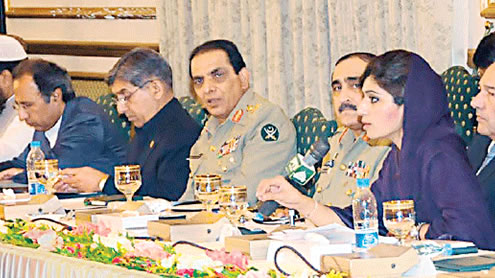 An All-Parties Conference (APC) was held on Thursday at Prime Minister Gilani’s call to discuss Pak-US relations in view of recent events. Admiral Mike Mullen’s statement against the ISI irked Pakistan to such an extent that it led to war hysteria in the media. Mr Mullen openly blamed the ISI for supporting the Haqqani network. Pragmatically, the White House did not endorse Mr Mullen’s statement, which helped restore Pak-US relations to some extent. There were hardly any expectations from the APC given that our politicians had already resorted to ‘tough’ statements and warnings to the US in case of an attack. It was as if the civilian leadership wanted to give a stamp of approval to the military’s strategy.

The APC was attended by at least 56 political leaders and the army top brass, including army chief General Kayani. Foreign Minister Hina Rabbani Khar and Director General (DG) ISI, Lieutenant-General Ahmed Shuja Pasha briefed the APC participants. “There are other intelligence networks supporting groups that operate inside Afghanistan. We have never paid a penny or provided even a single bullet to the Haqqani network,” said General Pasha. After hours of deliberations, the APC was able to come up with a 13-point joint declaration. ‘Give peace a chance’, most likely inspired by John Lennon’s famous song, was declared to be “the guiding central principle henceforth” in the unanimously passed resolution. The APC “rejected the recent assertions and baseless allegations made against Pakistan” and affirmed the nation’s “full solidarity and support for the armed forces of Pakistan in defeating any threat to national security”. This is quite interesting given that the armed forces’ flawed security and foreign policies have landed Pakistan in the current mess.

While most of the APC participants were there only to pay lip service to the so-called ‘consensus’, there were a few dissenting voices at the APC. PML-N chief Mian Nawaz Sharif reportedly asked some tough questions and pointed out that there is no smoke without fire. Mian sahib addressed a press conference yesterday confirming those reports. “I talked in the moot about our internal weaknesses and called for introspection. We must ask ourselves whether we are at fault…we should admit our mistakes,” Mr Sharif told the media. He also said the government should reveal the terms of engagement between the US and Pakistan. Pakhtunkhwa Milli Awami Party’s Mehmood Achakzai reportedly told General Pasha that peace can be achieved in Afghanistan within a month if the ISI wanted.

Barring Mr Sharif and Mr Achakzai, the performance of our political leadership at the APC was shameful. What was even more shameful was how representatives of the minorities were not even invited to the APC. The boycott of the APC by the Baloch nationalists made the exercise seem less credible. The APC resolution smacks of an ostrich-like approach. The political class let the army and its intelligence agencies off the hook once again. Disastrous policies adopted by the military top brass for decades have created problems for Pakistan internally and externally.

Thus Mr Sharif and Mr Achakzai’s remarks were lauded by the saner voices in Pakistan. We must stop pretending as if everything is hunky-dory with our policies and the fault only lies with others. Pakistan’s India-centric security and foreign policies have not deterred India’s influence in Afghanistan and elsewhere. In fact, it has risen due to our self-defeating policies. If we really want to give peace a chance, we should stop interfering in Afghanistan through proxies and let the Afghans take care of their own problems. Former British Prime Minister Tony Blair’s recent statement should be given due consideration: “I think Pakistan is paying a heavy price for the mistakes of the 1970s by linking religion with politics and developing religious schools which are, in some cases, dangerous sources of extremism.” It is indeed time for serious introspection. – Dailytimes