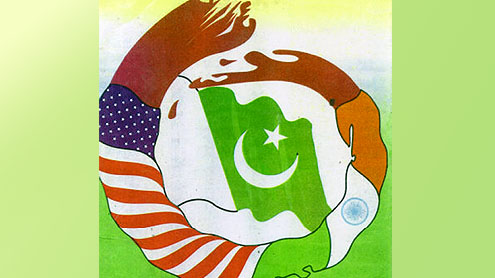 It is not without reason that we keep warning our leadership that India is an inveterate enemy of Pakistan. As New Delhi finds Islamabad facing a threat of aggression from the US, it has stepped forward to exploit the situation, not inconceivably without the active encouragement of the Americans. According to a report carried by the Times of India, it has brought forward, at the closest base to the international borders with Pakistan, a squadron of 16 military aircraft to compound our security concerns. These aircraft can carry all types of weapons and fly at the fantastic speed of over 2000km an hour. On the western border in Afghanistan, the American surrogate and Indian friend President Hamid Karzai does not miss an opportunity to make matters worse for us.

He has launched a furious tirade against Pakistan accusing it of involvement in the murder of former Afghan President Burhanuddin Rabbani, who was also the main man organising peace negotiations with the Taliban. Mr Karzai is so obsessed about toeing the US line that he would be ready to cloud the issue, mindless of the Afghanistan’s own interests. Mr Karzai is trying to tell the world that the Taliban would accept any solution of the Afghan tangle that Islamabad agrees to; since their “sanctuaries and operating places” are in Pakistan. Thus, his cynical observation that he would talk to Pakistan for finding a solution and not the Taliban.

Pakistan is up against an acute challenge of multiple dimensions. Apart from internal problems, by no means easy to surmount, external dangers constitute a real existential threat to the country. The US, with all its might and that of its 40-odd allies, stands helpless in the face of a badly equipped resistance, after having fought for 10 years. Desperate in defeat, it wants to get out of Afghanistan. At the same time, it wants to give the impression of an honourable exit. To meet this objective, it has adopted twin strategies: to achieve a peaceful settlement through talks with the Taliban; and, secondly, to blame Pakistan for the civil war that is most likely to ensue on its departure owing to the ethnically distorted power-sharing arrangement it is trying to bequeath to the Afghans.

There is dire need to remain vigilant against the evil designs of the forces arraigned against us. One would have thought that Mr Karzai would think in the long-term interests of his country and would not pick up quarrels with Pakistan. He should know that Pakistan, with a larger population of Pashtuns than Afghanistan, cannot remain unconcerned if a post-US dispensation discriminatory against the Pashtuns is tried to be imposed on his country. As for the Indian hostility towards Pakistan, the less said the better. The US feels frustrated at the looming failure of its designs against China because its adventure in Afghanistan fell through and is trying to take its frustration on Pakistan. We have to squarely confront these forces and given the sincerity of purpose can ward off the danger. – Nation