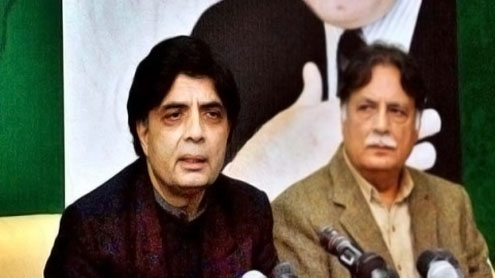 Faced with veritable political turmoil threatening early general elections in the country, Prime Minister Yousuf Raza Gilani has asked the opposition to bring issues of public concern to the National Assembly to ensure that they are satisfactorily settled.

He was responding to the biting criticism earlier made by the Leader of the Opposition, Chaudhry Nisar Ali Khan, of government performance on the floor of the House on Wednesday “We will not disperse until we find a solution” to the problems of PIA, Pakistan Railways and the circular debt in the power sector, Mr Gilani said. Strangely for Mr Gillani and Mr Nisar both, they are seized with an urgent desire to solve these problems, after they have been the talk of the town since the current setup assumed office.

The offer of cooperation with the opposition, at this stage sounds quite strange and appears to be obviously designed to stave off the developing crisis on the country’s political horizon. It also betrayed a studied attempt at naiveté. Having a direct bearing on the lives of the people, these problems – runaway inflation, crippling power shortage, acute joblessness, massive corruption, for instance – have existed for quite some time. The authorities ought to have by now worked out their solutions. They have been the very stuff of the fare that the electronic as well as the print media present every day in their news and discuss threadbare in their columns and talk shows.

Also noteworthy is a peculiar phenomenon in Pakistan: Even members of the governing coalition, at times, do not hesitate to express their frustration at the official apathy to address them. Evidence of the scandalous corruption practised in the award of contracts of rental power plant projects has been presented before the Supreme Court by a government minister, who is fighting a case to put an end to the loot.The opposition has been strengthened by the emergence of new political realities like Imran Khan’s PTI.

There is also acute unease following Dr Zulfiqar Mirza’s charge against the MQM of setting off the cycle of violence in Karachi. However, the PML-N needs to realise the danger, to the democratic order in the country, of trying to dislodge the government from the seat of power and must force a change in its attitude towards the malaise of bad governance through constitutional means.

Mian Nawaz Sharif should know that in this climate of political polarisation, the restoration of Bahawalpur state status that he has favoured would open a Pandora’s Box, as other former states, which merged into Pakistan, would feel justified in demanding a similar status. His idea is pandering to the gallery, trying to escape from the ‘friendly opposition’ label after three years. He can do better.  – Nation