Peace with the Taliban? 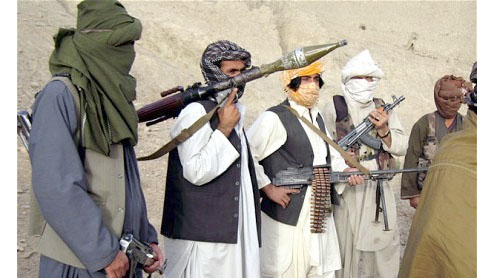 Amidst nerve fraying political turmoil in the country, highly disturbing and unexpected news of peace talks with the Tehreek-e-Taliban Pakistan (TTP) hit the country late Monday. The shocker was the announcement coming from Taliban spokesmen — not the government.

Whilst the spokesmen outlined detailed conditions for peace, and said the talks process had been ongoing for the past six months, the situation plunged into confusion first with unnamed government sources denying any peace talks, and then with the Inter Services Public Relations (ISPR) categorically refuting the reports as “concocted, baseless and unfounded”. The ISPR added, “any contemplated negotiation or reconciliation process with militant groups has to be done by the government”, deflecting any anticipated flak towards the civilian government. And to make mincemeat of the denials, a TTP commander ‘declared a ceasefire and halted attacks around the country in support of peace talks’ late last evening.

Whilst the main TTP spokesman Ehsan denied any peace talks, the details divulged by two other ‘commanders’ as well as ‘mediators’ said to be retired civil and military officials were too detailed to be dismissed out of hand. The demands include withdrawal of the military from South Waziristan (to be replaced with police patrols), compensation for damage incurred during the South Waziristan operation, release of Taliban prisoners and freedom for Taliban leaders to roam the country. As ‘confidence building measures’ the Taliban said they had even released five ISI officers kidnapped in Balochistan. The latest demand is for Pakistan to sever all ties with the US.

Denial or silence from all quarters of the government begs the question who is negotiating with the TTP, and on what authority. Given past lessons, a peace deal with the Taliban is no trivial matter. The Swat fiasco, with Afghan-style beheadings, ‘speedy Islamic justice’, abrogation of fundamental human rights, denial of education or work opportunities to girls and women, enforcement of beards, and banning of music is fresh in memory. The population of Swat was effectively thrown to the wolves, courtesy the ‘peace’ with our ‘brethren’, the Taliban.

Only when the Taliban advanced to Buner (60 miles from Islamabad) soon after, did the politicians and the media wake up to the threat. It seemed the Taliban and their shariah were fine as long as they were limited to the ‘other’ — the ‘other’ being the hapless inhabitants of Swat. As soon as the threat came too close for comfort, the ‘national’ mood changed. A mini-war had to be fought to flush the militants out of Swat, causing untold misery to the Swatis. Yet, it seems lessons were not learnt.

Without exception, whenever ‘peace deals’ with Taliban militants or their affiliates were struck, be it in the tribal areas or elsewhere, the state ceded time and space for them to regroup to attack the state with renewed vigour. The TTP’s ideology, closely aligned with al Qaeda’s pan-Islamist goals, is a well known commodity. Even if, unlike in the Swat peace deal, the Taliban have not yet put forth demands for shariah implementation, it remains a stated goal. It is a well known fact that they neither recognise the constitution of Pakistan, nor any of its institutions. They take their inspiration from the Afghan Taliban and al Qaeda, and will eventually advance after the welcome breather of a ‘peace deal’.

Repeated military operations and peace deals over time have resulted in the militants gaining strength and turning the whole country into an undeclared war zone. National consensus needs to be built to steadfastly fight these criminals until crushed, instead of surreptitiously trying to cut ‘deals’ with them and selling out an unsuspecting public to a horrific fate. – Dailytimes